Located just off Plaça Espanya, on the slopes of Montjuïc, the Museu Nacional d’Art de Catalunya (MNAC) is the national museum of Catalan visual art and includes one of the largest collections of Romanesque art in the world.

The MNAC is located in the Palau Nacional of Montjuïc, or National Palace of Montjuïc, which was constructed for the International Exposition of which took place in Barcelona in 1929. The palace itself extends over 32,000m2 and its design was inspired by the Spanish-renaissance and the academic classicism which was popular at the time. The edifice dominates the view from Plaça Espanya and is a popular tourist sight in its own right. 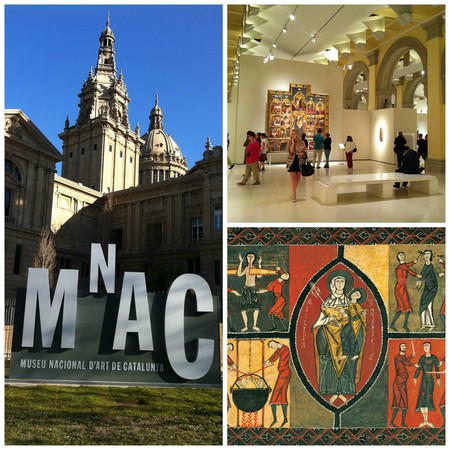 The MNAC collection includes what is believed to be the largest collection of Romanesque art in the world, ranging from approximately 1000AD to the beginning of the Gothic era in the 13th century. It boasts an impressive collection of Catalan Romanesque paintings and sculptures, many of which originally hung in rural churches of Catalonia, including many panel paintings and wood carvings. In addition to its Romanesque collection, the museum contains collections of Gothic, Baroque and Renaissance works of art, as well as a modern art collection which has its origins in the 1888 Universal Exhibition which took place in Barcelona. This modern art collection ranges from the early 19th century up until the the 1940s. Modern art dating from the mid-twentieth century onwards is available to see at the Museum of Modern Art of Barcelona (MACBA).