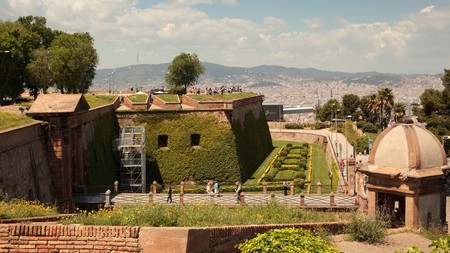 Barcelona has so many beautiful Modernist buildings, Gothic alleyways and Mediterranean beaches surrounded by majestic green hills that you could spend your whole visit just marvelling at the views while walking around – but you won’t want to miss the cultural experiences within those lovely settings.

Whether you’re a Medieval history buff, an architecture enthusiast, a football fan or a passionate foodie, Culture Trip has rounded up the top 26 attractions to experience when visiting the Catalan capital. 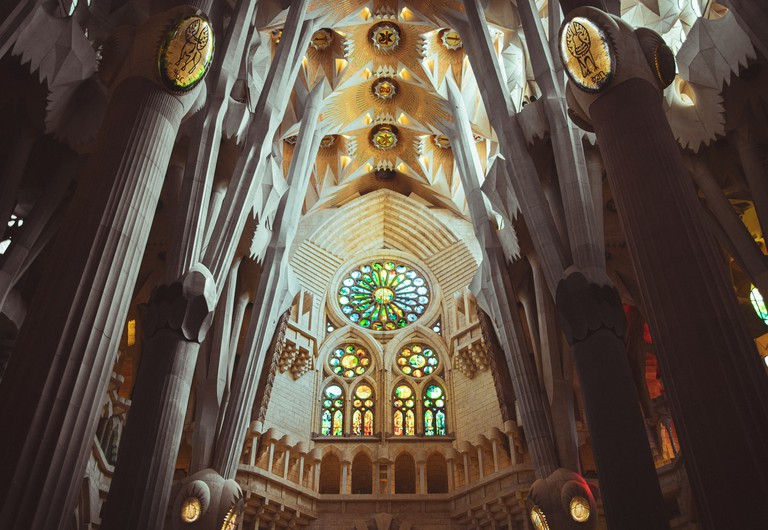 La Sagrada Familia, Barcelona, Spain | Photo by Burak Aslan on Unsplash
One of the most popular attractions in Spain is the Sagrada Família – a Catholic basilica designed by Catalan architect Antoni Gaudí, who was famous for championing the architectural style known as Catalan Modernism or Modernisme. It has been under construction for over 100 years and isn’t expected to be completed until 2026, yet the originality and grandeur of its design attract over 3 million visitors each year. 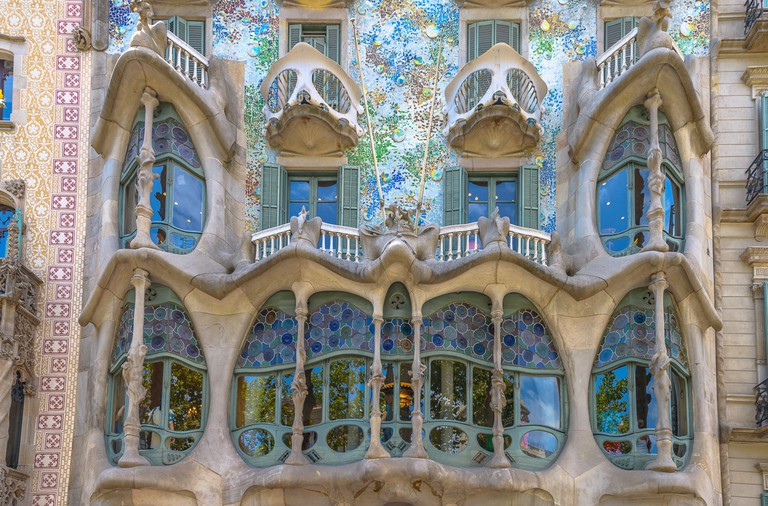 Casa Batlló has a skeletal appearance | © Fadi Al-barghouthy / Alamy Stock Photo
Another Modernist marvel designed by Gaudí, the Casa Batlló is a former townhouse constructed for the Batlló family in the 19th century. Its unusual appearance rich in curves, natural forms and a quasi reptile-like tile facade have earned it the nickname of Casa del Drac, or House of the Dragon. 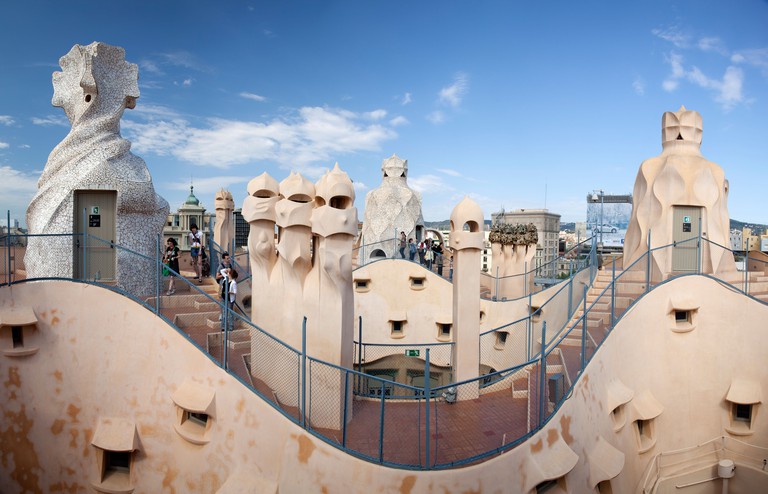 Chimneys on Casa Mila | © JLImages / Alamy
Located one block north of Casa Batlló, La Pedrera was the last private residence designed by Gaudí. The building gets its name, which means ‘the stone quarry’, from its rough-looking facade. Its chimney-like structures rising skywards are said to have inspired George Lucas’s design of the stormtrooper helmets used in Star Wars. 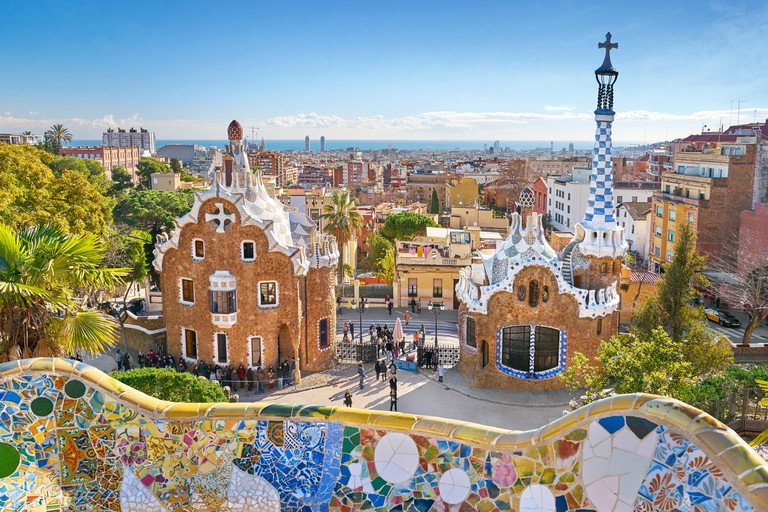 © Jan Wlodarczyk / Alamy Stock Photo
Park Güell is one of the most popular outdoor attractions in Barcelona, and yet what few people know is that it was initially conceived to be a revolutionary housing estate. Antoni Gaudí and his patron and friend Eusebi Güell originally acquired the area and began construction on a model home. When no one invested in the project, they eventually abandoned it, and it was later donated to the local council and transformed into a public park. 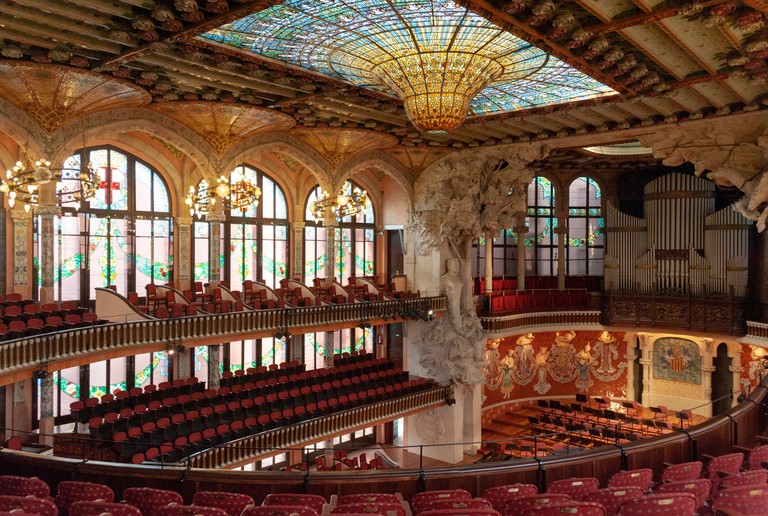 Lluís Domènech i Montaner designed the Palau de la Música Catalana | © Bildarchiv Monheim GmbH / Alamy Stock Photo
A 19th-century music hall, the Palau de la Música Catalana is the work of another great Catalan architect, Lluís Domènech i Montaner, who is also renowned for his contributions to Catalan Modernism. The palace’s exterior boasts ornate columns and mosaic work, while on the inside, a stained-glass ceiling dominates the auditorium. 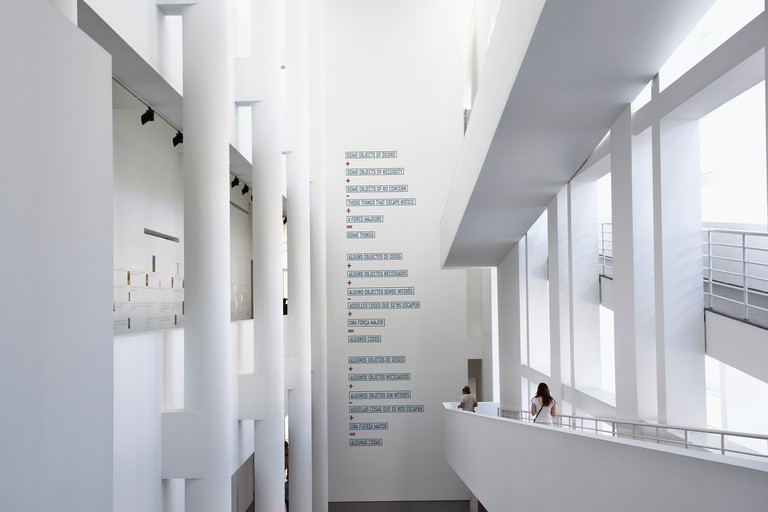 © M Ramírez / Alamy
The MACBA is Barcelona’s contemporary art museum and one of the leading institutions of its kind in Europe. Designed by American architect Richard Meier and inaugurated in 1995, it has hosted exhibitions by some of the most well-regarded artists of the 20th and 21st centuries. 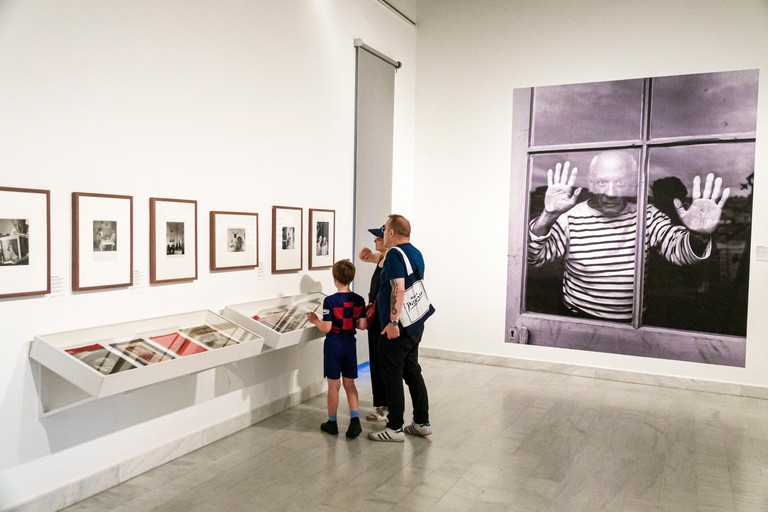 © Jeffrey Isaac Greenberg 6+ / Alamy
Pablo Picasso moved to Barcelona when he was a child and attended the prestigious La Llotja art school before acquiring his first studio in the Gothic Quarter. The city remained an important place for the artist throughout his lifetime, and the Picasso Museum is a testimony to this important relationship. 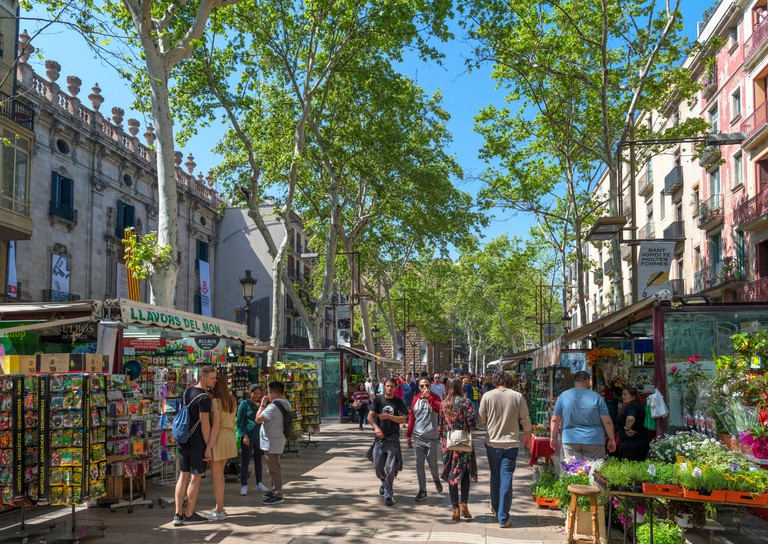 Stalls along the busy Ramblas | © Ian Dagnall / Alamy
The most iconic street in Barcelona, La Rambla is a large boulevard that runs from the Plaça de Catalunya to the seafront. It originally marked the edge of the town centre during the Middle Ages before later becoming a famous street full of cafés, shops and, of course, La Boqueria food market. 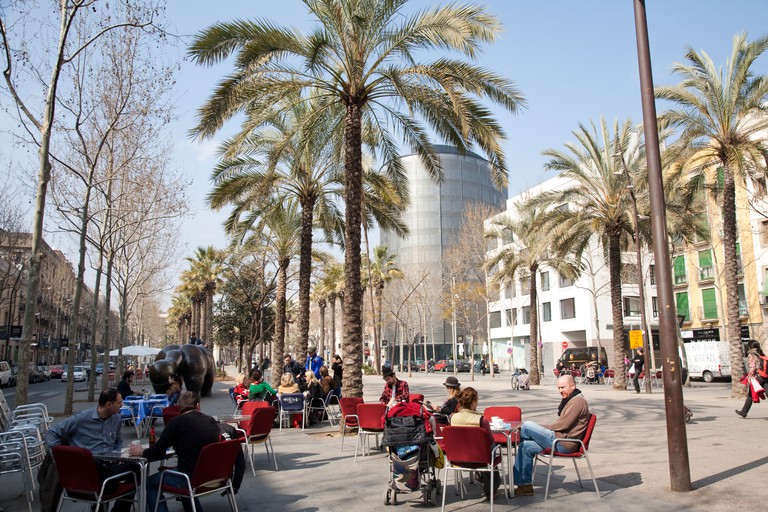 Barcelona is known for more than one Rambla, which is roughly translated into a ‘wide, tree-lined promenade’. Just a few blocks west of the more heralded Rambla is La Rambla de Raval, the heart of Barcelona’s counterculture district. The street is mostly known for being the connection point for multicultural groups and for its famed sculpture of a giant corpulent cat by Colombian artist Fernando Botero.

View of the Passeig de Gracia | © Sergio Torres Baus / Alamy
Once upon a time, the area of Gràcia was an independent town that sat on the edge of Barcelona. However, it was later annexed by the city in the 19th century. The Passeig de Gràcia is the historic route that connects the two areas and has drawn comparisons with the Champs-Élysées in Paris for its abundance of designer and luxury boutiques. 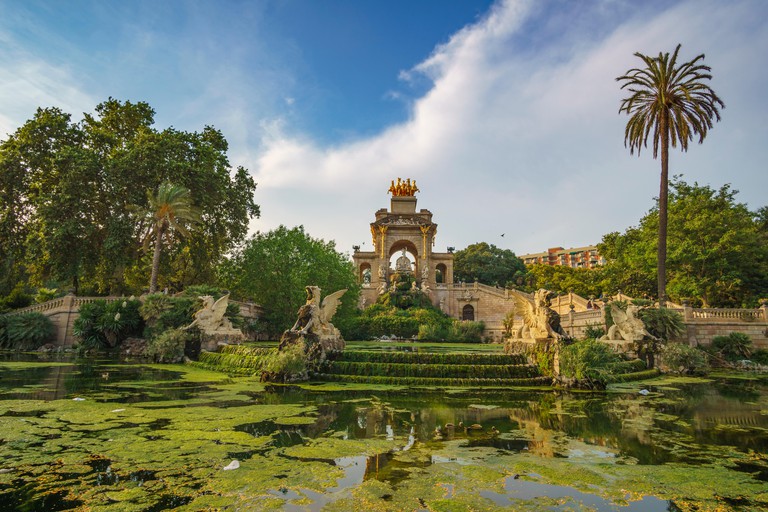 © Panagiotis Kotsovolos / Alamy
Ciutadella Park is Barcelona’s centrally located green space, which has been a gathering point for life in the city since its creation in 1877. Indeed, when it first opened, it was only public park in the city. These days, it is home to an increasing amount of yoga groups, the Catalan Parliament and the Barcelona Zoo. 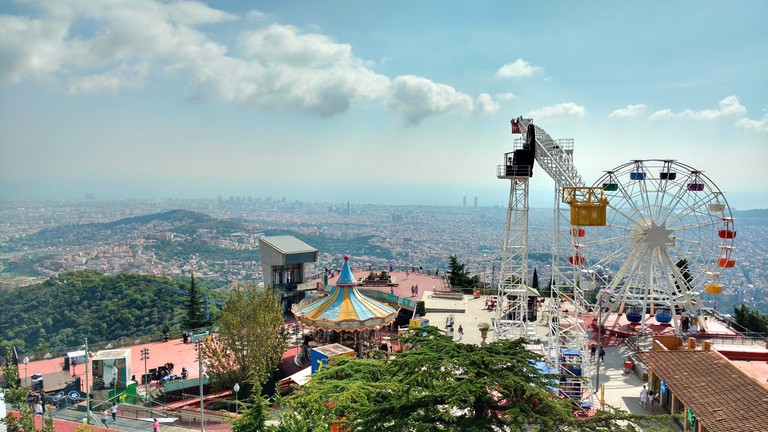 Tibidabo, Barcelona | Photo by WeLoveBarcelona.de on Unsplash
Look to the horizon from nearly anywhere in Barcelona, and you’ll be able to see the tops of Mount Tibidabo and the Temple Expiatori del Sagrat Cor neatly atop it, sitting alongside the Tibidabo Amusement Park. The oldest functioning amusement park in Spain, it has been open since 1905. 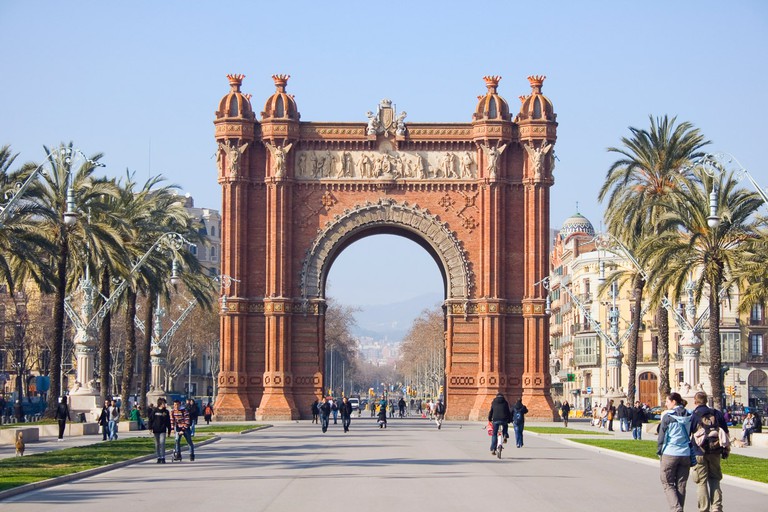 The Arc de Triomf was the main gateway for the 1888 Barcelona Universal Exposition | © Hilary Morgan / Alamy Stock Photo
Designed by Modernist architect Josep Vilaseca i Casanovas, the Arc de Triomf is Barcelona’s answer to the eponymous triumphal arch in Paris. However, unlike its northern cousin, this arc was constructed for a very different reason – as the main access gate for the 1888 Barcelona Universal Exposition. It is a main artery of the city and the site of numerous cultural fairs, including markets and parades celebrating Chinese, Thai and Bolivian heritage, just to name a few. 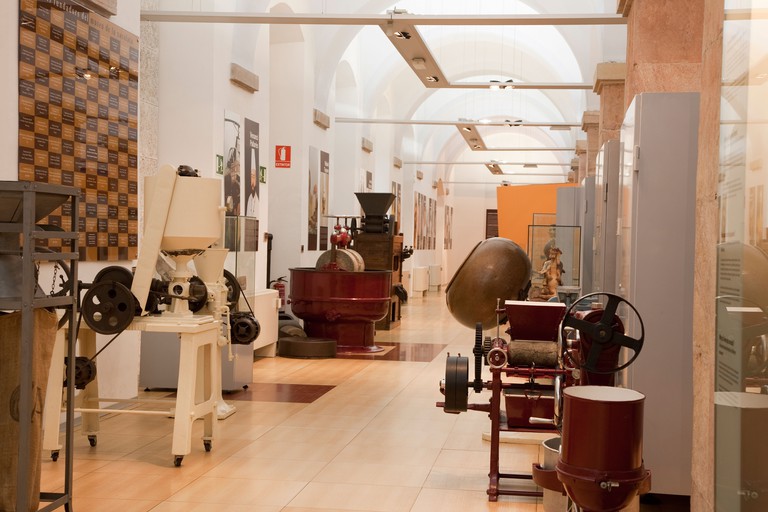 Interior of the Chocolate Museum in Barcelona | © Kevin George / Alamy
Chocoholics, be warned: things are likely to get a little messy at the Barcelona Chocolate Museum. The city has long had a close relationship with all things cacao-based. For example, the Spanish historically extracted the product from Central America, and troops of the Bourbon Kings are said to have received a daily chocolate allowance for breakfast. Aside from learning about the process of making chocolate, visitors can admire original chocolate sculptures and take part in a workshop to be a chocolatier for the day. 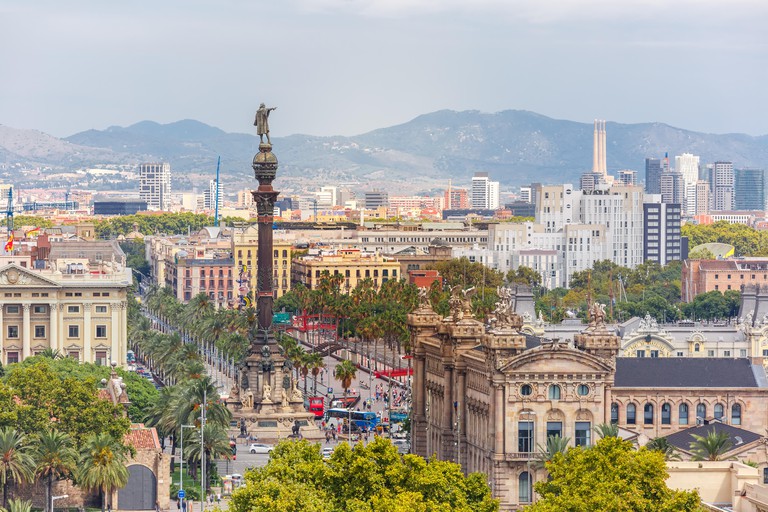 © kavalenkava volha / Alamy
Standing on the pier at the very end of La Rambla, the Mirador de Colom is a homage to the explorer Christopher Columbus, who paid a visit to the Catalan capital before setting sail to America. The monument is also a viewing tower that’s accessible via an elevator and offers panoramic views of the city and sea. 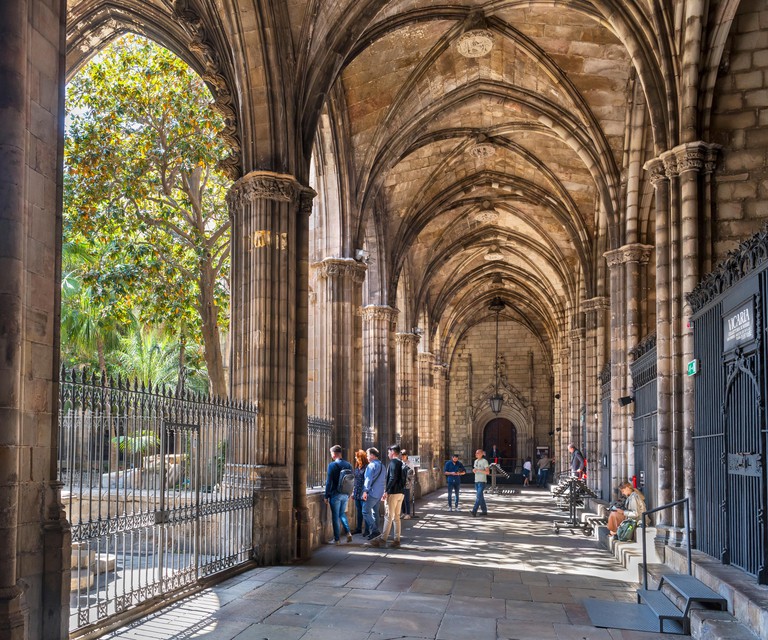 © Ian Dagnall / Alamy
The Barcelona Cathedral was first built in the 13th century but didn’t receive its distinctive facade until the 19th century, making it neo-Gothic rather than Gothic. Parts of the original Gothic facade are still visible if you walk down the side of the cathedral. 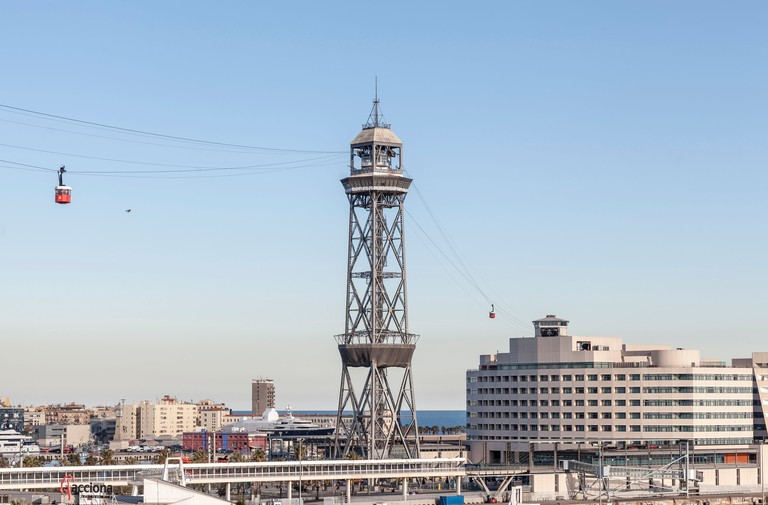 © Juan Bautista / Alamy
The Port Vell Aerial Tramway is, as its name suggests, a large air-borne cabin that transports people from the Port Vell harbour to the slopes of Montjuïc. It first opened in 1931, at which time it went to the top of Montjuïc. However, after falling into disrepair after the Spanish Civil War, it was later re-opened in its new form and has become a popular attraction offering great views of the city. 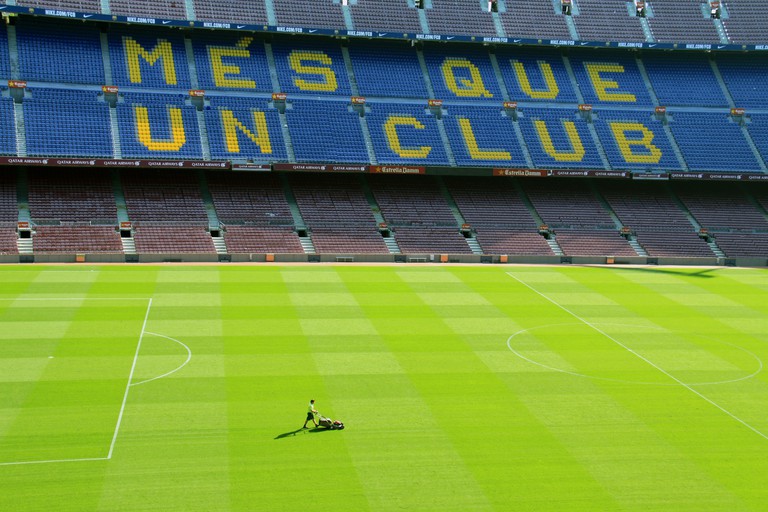 Camp Nou, Barcelona, Spain | Photo by Nick Fewings on Unsplash
Not only is Camp Nou the home of the world-famous FC Barcelona football team, it’s also the largest football stadium in Europe. Book the Camp Nou Experience tour to visit the grounds as well as the FC Barcelona Museum, which displays trophies, original football shirts and other memorabilia. 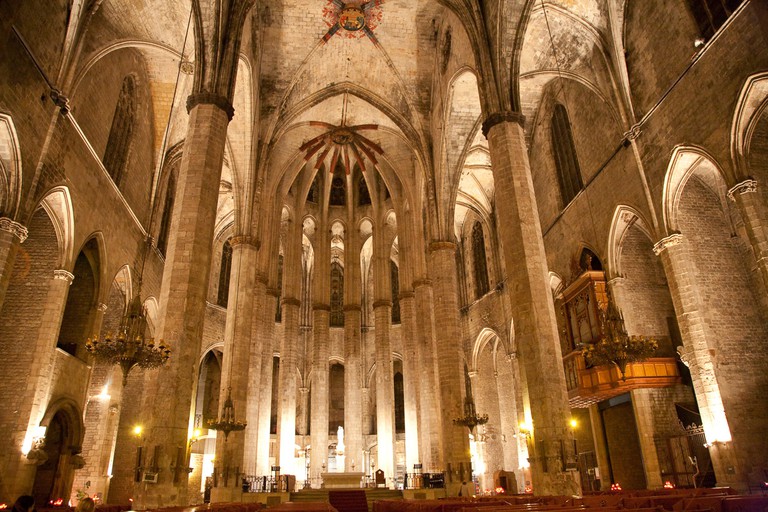 The Santa Maria del Mar is a Catalan Gothic cathedral | © Stefano Paterna / Alamy Stock Photo
Located just off the Via Laietana in the neighbourhood of El Born, the church of Santa Maria del Mar is a Catalan Gothic basilica that has existed in some form since at least the 10th century. Among residents, it is sometimes referred to as ‘the church of the poor’ or ‘the church of the common man’, in contrast with the aforementioned cathedral, which was attended by the city’s wealthier citizens. 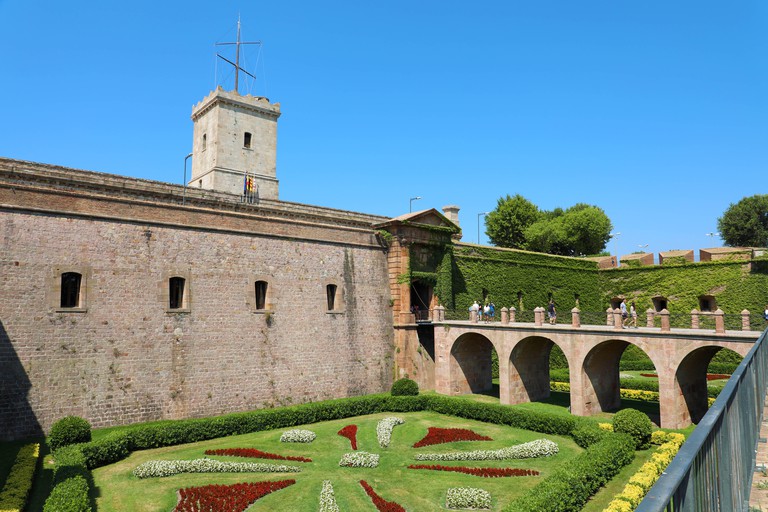 Montjuïc Castle dates back to the 17th century | © Sergio Monti / Alamy Stock Photo
Sitting at the very top of Montjuïc, this 17th-century castle was constructed as a military fortress. Since then, it has served as a military base and also a prison during the Spanish Civil War, and today, it is open to the public as a museum. 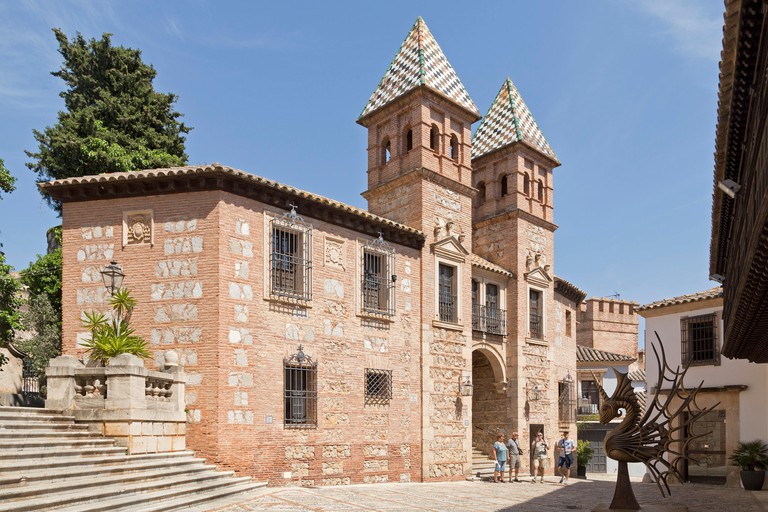 Poble Espanyol is an open-air museum highlighting various Spanish villages | © Kuttig - Travel / Alamy Stock Photo
Many visitors come to Barcelona expecting to take in the quintessential culture of Spain but then realise that they have landed in Catalunya, a distinct region of the country. As Spain comprises widely varying cultures, Poble Espanyol offers an outdoor museum (just alongside Montjuïc) that showcases each one of the country’s unique regions. From the Basque Country in the north to Andalusia in the south, Poble Espanyol is a journey featuring 117 full-scale buildings that recreate a variety of Spanish villages. This site, which often hosts large cultural events, provides visitors with a chance to learn and explore Spain’s great variety of history, food and culture without ever leaving Catalunya. 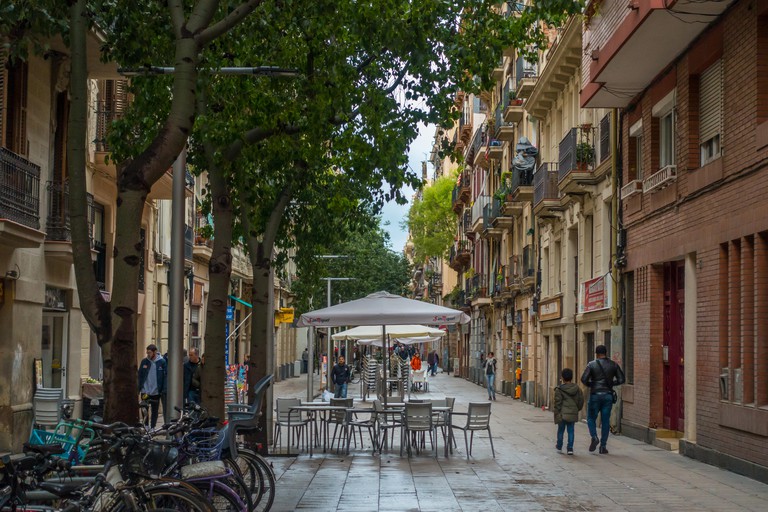 At the base of Montjuïc in the rapidly gentrifying neighbourhood of Poble Sec is a long pedestrianised street famed for its terrazas (terraces) replete with pintxos. Carrer de Blai has at least 20 bars dedicated to the bite-size Basque morsels, and its terrazas fill up quickly after work with crowds who come in to grab a cold caña (draft beer) and munch on some well-priced snacks. 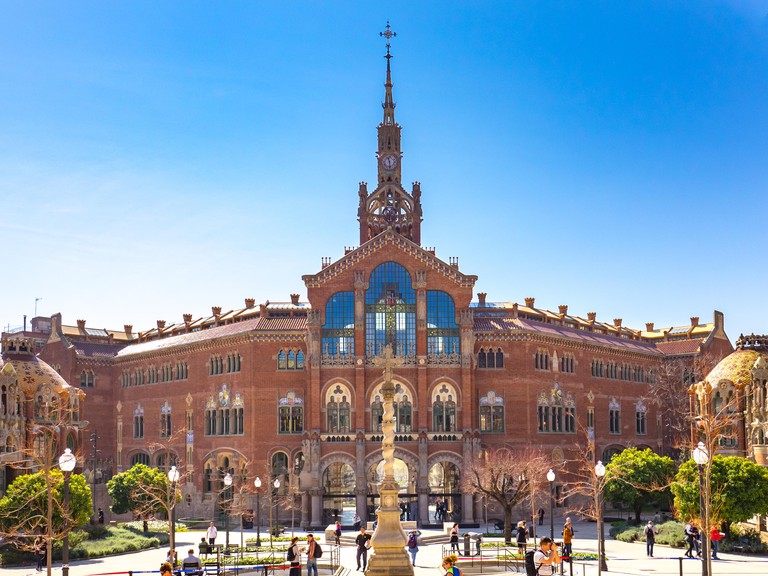 © Sergio Torres Baus / Alamy
A spectacular Modernist design by Domènech i Montaner, the Sant Pau Hospital opened in the 1930s and was a fully functioning hospital until 2009 when a new structure was constructed to replace it. Today, the building is open to the public as a cultural centre and museum. 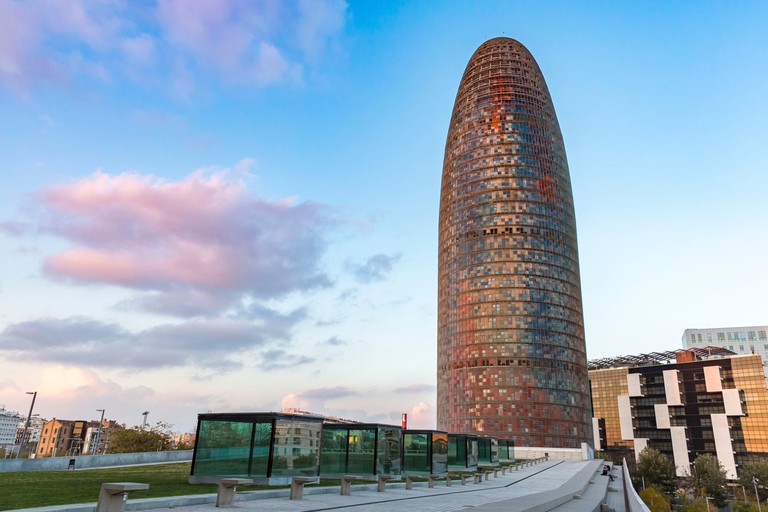 Torre Glòries | © mauritius images GmbH / Alamy
A recent addition to the urban landscape of Barcelona (it opened in 2005), the Agbar Tower is a modern office building housing Aigües de Barcelona, the city’s water company. Designed by French architect Jean Nouvel, the tower is covered in some 4,500 LED lights, which illuminate the facade at night, and features an intelligent temperature control system that uses automatic sensors to control the blinds. 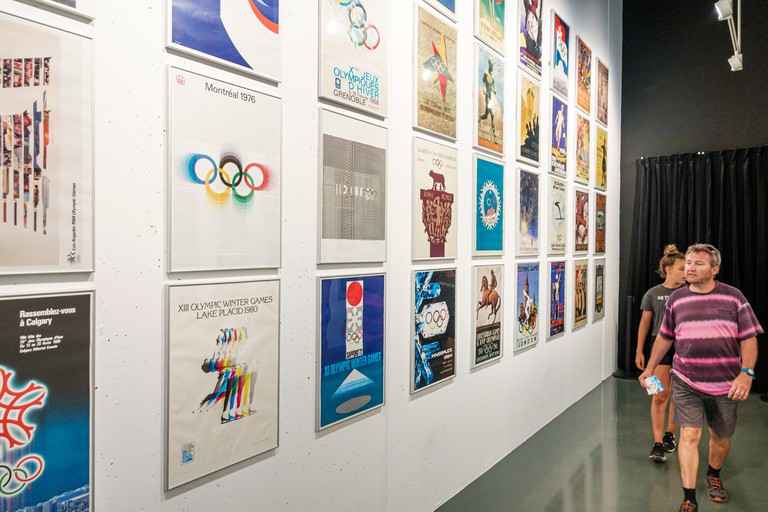 © Jeffrey Isaac Greenberg 4+ / Alamy
The 1992 Olympics marked a turning point in the history of Barcelona, catapulting it to the leading international tourist destination it is today. The Joan Antoni Samaranch Olympic and Sports Museum is a tribute to this most memorable of sporting events, featuring interactive displays and exhibitions as well as hosting live sports-related events. 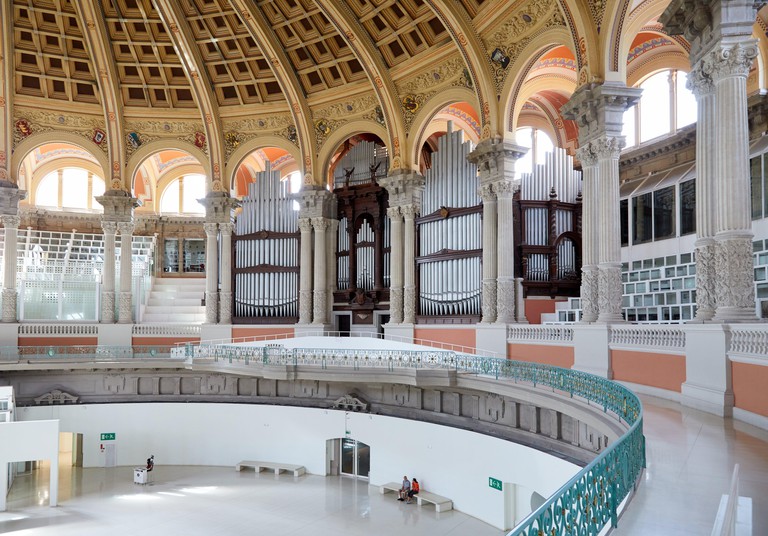 © agefotostock / Alamy
At MNAC, visitors can immerse themselves in Catalan history via sculptures, paintings, ancient relics and more. The most famous of the permanent exhibits features Romanesque murals that were carefully relocated from church apses across Catalunya and reconstructed here in the 1920s. The museum is also home to the region’s largest collections of Gothic, Renaissance and Baroque art, as well as a large section dedicated to modern artworks, including the Picasso masterpiece Woman in Hat and Fur Collar.

No way you’re going to see all of the Catalan capital in one day. Find where to stay in Barcelona and book with Culture Trip.