Catalan Language: Everything You Need To Know 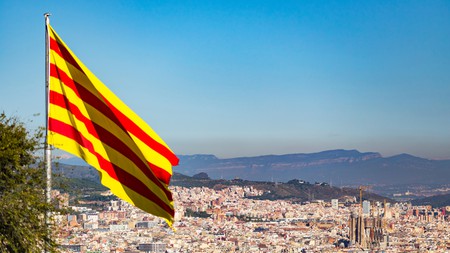 Anyone who has spent any length of time in Catalonia will know that “Hablar español?” isn’t the best way to get to know the local people and their customs. Becoming acquainted with the Catalan language and finding out how it’s different to Spanish will provide you with key insights into the history, habits and humour of the locals.

There are over 9 million people in the world who can speak Catalan, with more than 4 million speaking it as a native language, according to official census data. Catalan is spoken natively in parts of Spain (in Catalonia, Valencia and the Balearic Islands), France (in the area of the Pyrénées-Orientales), Andorra and even Italy. Of those who speak it natively, nearly all are bilingual, speaking either French, Spanish (Castellano) or Italian in addition to Catalan, depending on where they live.

Catalan is sometimes more similar to French than Spanish

Although Catalan, Spanish, French, Italian, Portuguese and many other European languages have their origins in Latin (these are known as Romance languages), each has evolved in its own way. However, despite mostly being spoken in present-day Spain, Catalan actually shares many more similarities with the language of neighbouring France. For example, the Catalan word for morning is matí and the French equivalent is matin, whereas the Spanish equivalent is mañana.

Catalan language origins differ from those of Spanish

Spanish as we know it was profoundly influenced by Arabic, as a result of the 8th-century Moorish conquest. As a result, many words used in Spanish today are imported directly from Arabic, or have been heavily influenced by it. Ever noticed how many Spanish words start with ‘al’? That’s simply the Arabic word for ‘the’. For example, the Spanish albóndiga (meaning ‘meatball’) is believed to derive from the Arabic al-bunduqa, meaning ‘the ball.’ While Catalan was also influenced by Arabic, however, it didn’t evolve with the same tendency to add the Arabic prefix ‘al’ to its nouns. For example, the Spanish word for ‘artichoke’ is alcachofa, while the Catalan equivalent is carxofa. The Spanish word for ‘cotton’ is algodón, and the Catalan equivalent is cotó.

There are as many as six dialects in Catalan

Those who don’t know any better might think that Catalan is nothing more than a Spanish dialect. However, not only is Catalan a fully fledged language in its own right, it can also be broken down into six dialects of its own, broadly divided between two groups: Eastern and Western Catalan. The six dialects correspond to specific areas, from west to east: Valencian (spoken in Valencia), Northwestern Catalan (spoken around Lleida, parts of Tarragona and La Franja), Central Catalan (spoken around Barcelona and Girona), Rousellonese (spoken in the Roussillon area of France), Balearic (in the Balearic Islands) and Alguerese (in the city of Alghero).

After the War of Spanish Succession (1701–1714) during which Catalonia lost its independence to King Philip V and the crown of Castille, Catalan culture underwent a period of decline, exacerbated by new laws insisting on the use of the Spanish language. However, the beginning of the 19th century saw the emergence of a wave of artists, authors and playwrights who wished to revive the Catalan language. This period, known as La Renaixença, saw the re-establishment of a Medieval tradition called Jocs Florals, or ‘floral games’, a competition in which Catalan poets would compete for recognition in various categories such as best love poem or best patriotic poem.

Catalan was banned in Spain until as recently as 1975

In an attempt to promote a universal Spanish nationality, General Franco banned all languages other than Spanish from being used in Spain. This included Catalan, which had been recognised as an official language only during the Second Spanish Republic of 1931–1939, following a period of Catalan literary revival in the 19th and early 20th centuries. As a result of the ban, no newborns were allowed to be given Catalan names; streets and monuments with Catalan names were given Castilian names instead; all television, film and music were to be produced in Spanish; and speaking Catalan in public was severely frowned upon and even punished.

Catalan is the only official language of Andorra

As much as Catalan may be the preferred language of choice among the local population of Catalonia, in Andorra it is the sole official language. In Catalonia, Valencia and the Balearic Islands, Catalan is an official language alongside Spanish (Castellano), meaning that all official communication has to be available in both.