The History Of Park Guëll In 1 Minute

With its mosaic salamander and serpentine bench, Park Guëll is perhaps the most iconic of green spaces in Barcelona. However, what few people know is that Park Guëll was never originally designed to be a park, and it owes less to the Catalan architect Antoni Gaudí than most people might think. Read on to find out more about this landmark of Catalan Modernism.

Located on the slopes of Carmel hill on the outskirts of Barcelona, construction on what is now known as Park Guëll began in the year 1900. It was originally conceived of as a housing estate and was inspired by the early 20th-century movement in English urban planning known as the ‘garden city movement’ (and hence the English spelling of ‘park’ instead of the Catalan ‘parc‘). The idea was to create self-contained communities surrounded by green, open spaces. The plot’s location on the edge of the city meant that it abounded in clean air, away from the smog of factories, and there was plenty of open space on which to build. The project was named after the main sponsor, Count Eusebi Guëll, who commissioned the Catalan architect Antoni Gaudí to design it. 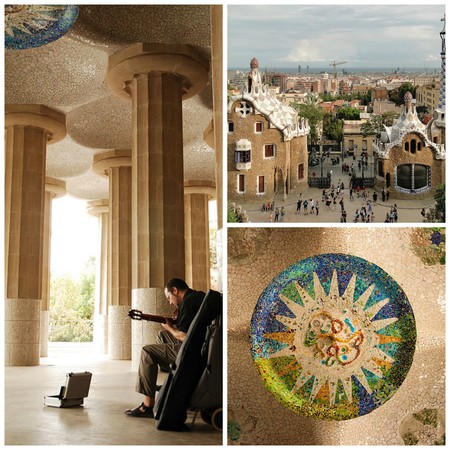 However, when the first of the model houses was completed in 1904, the sale of the property was a failure, and Guëll eventually convinced Gaudí to purchase it himself and move into it with his family. Ironically perhaps, the property was not designed by Gaudí but rather by his contemporary Francesc Berenguer, but it would remain Gaudí’s home until his death in 1926. It was in that year that the project was officially opened as a public park, and today it attracts millions of visitors each year. The most iconic features of the park include the multi-colored mosaic salamander known as ‘el drac,‘ meaning ‘the dragon,’ and the main terrace with its serpentine benches, which was originally conceived of as a place for open-air performances. Other remnants of the project’s original design include the Hypostyle Room, located beneath the main terrace and conceived of as a marketplace, and the system of paths and viaducts designed for people to access individual plots and navigate across the estate. Despite its failings as a housing estate, Park Guëll remains a remarkable architectural landmark designed by one of the true pioneers of Catalan Modernism.
📅 October 30-March 26, 2016: 8:30am-6:15pm
March 27-April 30, 2016: 8am-8pm
May 1-August 28, 2016: 8am-9:30pm
August 29-October 29, 2016: 8am-8pm