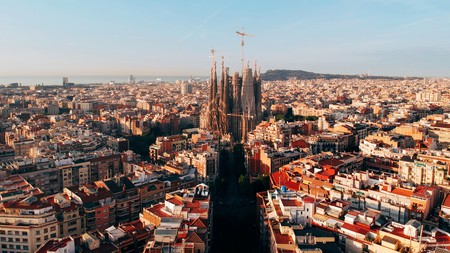 Tradition dictates that the clock in the Reial Acadèmia de Ciències i Arts marks the “official” Barcelona time. From this building’s front facade on La Rambla, the timepiece has seen the darkest hour of the city, the Spanish Civil War, as well as its modern grand dawn, the Olympic Games. Here’s a look at the key events that shaped Barcelona’s history.

The foundation of the town

According to a legend, when the demigod Hercules found himself where Barcelona sits today, the place appeared so welcoming that he decided to found a city with the support of Hermes, the god of commerce. More historically backed evidence suggests a Roman colony was present in the area from 218 BC. One of the discrete remnants of this heritage is the old Roman wall in Plaça Nova, in which two towers of a former city gate still flank the entrance to Carrer del Bisbe. 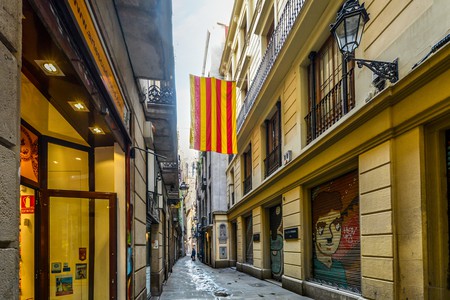 Rise of the County of Barcelona

In AD 801, Charlemagne’s troops established the County of Barcelona after conquering the territories that the Muslims captured in the early eighth century, and later on, the county asserted its political authority and seized more land southwards. As a matter of fact, the four red stripes of the Catalan flag were believed to be a personal symbol of Ramón Berenguer IV, Count of Barcelona. However, 400 years later, Pere Antoni Beuter wrote that Charles the Bald painted over Wilfred the Hairy’s golden shield with his bloody fingers. This epiphanic literary fiction has since remained a powerful, resounding myth.

Union with the Kingdom of Aragon

The Medieval times were the first golden age for Barcelona. The dynastic union between the Kingdom of Aragon and the County of Barcelona occurred when Count Ramón Berenguer IV married Princess Petronilla of Aragon. Barcelona was the political and economic centre of the kingdom and the starting point of an unprecedented Mediterranean expansion that included territories as far as Sicily and Athens. The prosperity brought by commerce pushed expansionism and marked the time of Gothic architectural magnificence in the city. 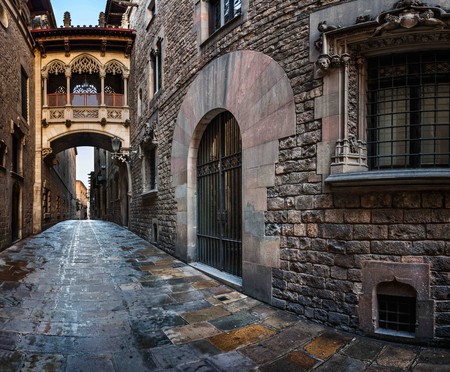 A time of decline

Due in part to the Ottomans’ blocking of eastern trade routes in the 15th century, commercial buoyancy became a thing of the past in Barcelona, and it faced a long-lasting economic decline. Curiously, though, it was during this time when a proper port was built on what today is known as Port Vell. When the union of the Castille and Aragon kingdoms took place in 1469, things gradually got worse for the town. In the mid-17th century, political turmoil first shook Barcelona with the peasant revolt that began the Reapers’ War and escalated until it reached a tragic climax in the awakening of the 18th century.

The War of the Spanish Succession

The War of the Spanish Succession concluded with the siege and occupation of Barcelona by French and Spanish Bourbon forces. Ironically, the so-called Age of Enlightenment plunged Barcelona into a period of darkness. Part of the old rebellious neighbourhood of La Ribera was razed to the ground, and the Ciutadella fortress was set in its place to subdue the city. Over time, Catalonia was permitted to trade with America after lifting a centuries-long ban, and Barcelona’s urban growth didn’t take long to feel its momentum start anew.

Barcelona was Spain’s leading industrial city for years. As a consequence, the first railway line of the entire country was established here in 1848. Cuba was the primary focus of the Catalan commercial activity, and the raw material imports from the island nation fuelled the prominent fabric industry. Meanwhile, the Gran Teatre del Liceu was finished in 1847 for the amusement of the new and growing bourgeois class. Nearby, Plaça Reial was constructed right by La Rambla, and the Canaletes Fountain was installed in 1892. 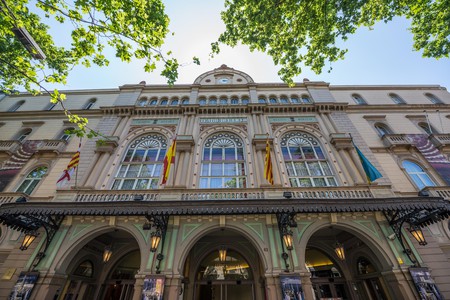 From 1860 onwards, an urban project in the neighbourhood of L’Eixample laid down the guidelines for the upcoming expansion, which would include Barcelona’s first streetcars (the first line opened in 1872). Plaça de Catalunya emerged during this time, but as a mere forsaken clearing at first, and for decades, it was spontaneously taken over by all sorts of merchants and showmen. Later, the 1888 Barcelona Universal Exhibition motivated the construction of city landmarks and grand avenues, such as Saló de Sant Joan (now called Passeig de Lluís Companys) and its starting point, the Arc de Triomf. 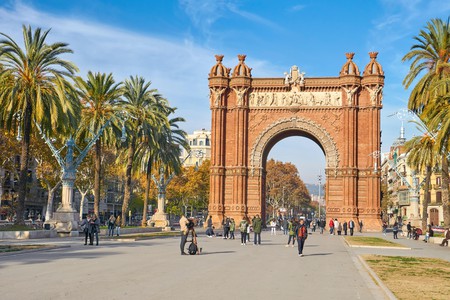 On the verge of the 20th century, Modernist artistic winds had spread across Europe. Referred to as Modernisme in Barcelona, this architectural movement was exalted by Antoni Gaudí when he designed the Sagrada Família project. In 1929, Barcelona hosted the International Exposition, which spurred the creation of new buildings, most importantly the Palau Nacional on Montjuïc. By then, the city was already a display of extraordinary and diverse architectural gems, which were to become its unmissable identity trait.

During this domestic ideological clash, Barcelona was subjected to aerial bombardments. The Bunkers del Carmel are a lasting reminder of the defences the city wielded against that threat, and nowadays, they offer spectacular views of the city. The outcome of the civil war opened four decades of dictatorship and political torpor, along with 20 years of economic stagnation. However, Barcelona rapidly woke up in the 1960s, experiencing a demographic boom that dramatically broadened the metropolitan area. 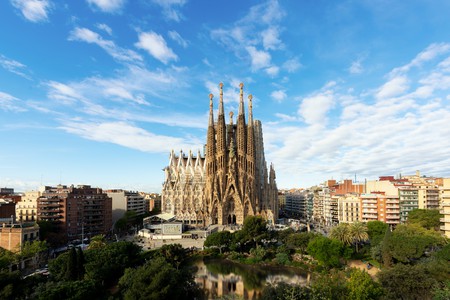 The progressive and creative atmosphere of the 1970s in Barcelona stood out in a culturally restrained Spain. Within this context, La Nova Cançó, a musical movement deeply rooted in Catalan culture, inspired democratic claims. Things were unmistakably starting to move on. In 1977, free elections took place in Spain, and that same year, on 11 September (the National Day of Catalonia), Barcelona saw a massive demonstration fill up Passeig de Gràcia, demanding further change with the motto of “Freedom, Amnesty and Statute of Autonomy”.

The feeling of ecstasy came to Barcelona in 1992 with the Summer Olympics. The games were framed by unforgettable opening and closing ceremonies, performed by the theatre companies La Fura dels Baus and Els Comediants. This event completely enchanted the world and laid the foundations for Barcelona as a top European travel destination. Buildings and new infrastructure projects fully regenerated the coastline, transforming Barcelona into a beach hotspot.

The 2004 Universal Fòrum de les Cultures couldn’t be deemed a total success. Nonetheless, it sent out a message: the city had turned into a global cultural player and it was here to stay. Around the same time, the Mobile World Congress landed in Barcelona, and the Primavera Sound Festival sent shock waves across the international music scene. 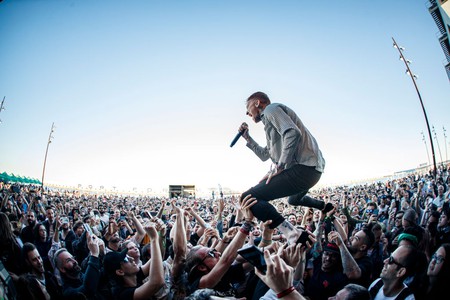