The Top 15 Food Experiences in Barcelona 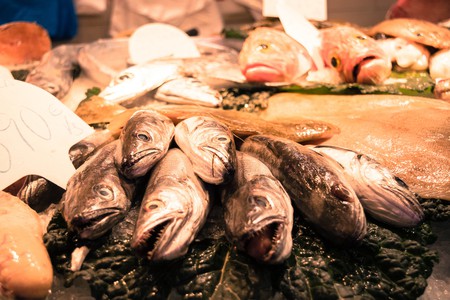 The food culture of Barcelona can be experienced in many ways, from pulling up a stool at a bustling market restaurant by day to sipping world-famous cocktails down dark medieval alleys by night. You could spend a lifetime eating and still not taste everything that makes Barcelona special, but here is a list of the top 15 Barcelona food experiences to set you off on the right path towards tasting the very best the city has to offer.

Eat a paella with views of the Mediterranean 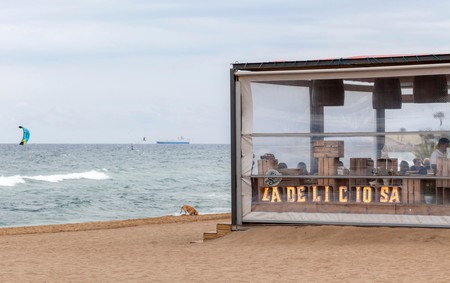 What most visitors expect when ordering paella in Spain is a heap of seafood on a bed of rice, when in reality, paella here is all about the rice, with the seafood acting as a garnish. Paella is usually a lunchtime dish (locals find it far too filling for dinner), so head to the beach after midday and prepare for a leisurely meal. Can Fisher is a great choice, as they combine modern and classic Mediterranean food beautifully, and you can choose between meat, seafood and vegetarian paella options.

Vermouth isn’t only for mixing cocktails. The trend of sipping vermouth solo came to Spain via the Italian city of Turin at the turn of the 20th century, and the first vermouth bar in the country was in downtown Barcelona. These days, Carrer Parlament (in the hip Sant Antoni neighborhood) is one of the most popular streets for a weekend vermut, often enjoyed before lunch as an aperitivo. Check out classic spots like Els Sortidors del Parlament for their artisanal vermouth and the wide array of tapas on offer.

Snack on churros and chocolate on Carrer Petritxol

This narrow and picturesque lane in the heart of the Gothic Quarter is known by many simply as the ‘churros street’. Home to two of the oldest and most iconic granjas (a traditional style of café popular in the 1930s and 1940s), this street gets especially busy around the holidays when families out shopping stop by for a taste of nostalgia at either Granja La Pallaresa or Granja Dulcinea. Churros are sold by the plate and are best when dipped in the thick drinking chocolate typical of these old-school cafés.

Carrer Blai is known to all as the pintxo street of Poble Sec. Pintxos (also pinchos) are the Basque style of bar food – essentially round disks of bread, topped with anything from sausage with quail eggs to fried ham croquettes or peppers stuffed with tuna salad, and speared with a toothpick. Carrer Blai has a high concentration of affordable pintxo and tapas bars, making it a favourite evening hangout spot for local families and students. Start at Blai Tonight for a few bites, then wander up and down the street until another spot catches your eye. 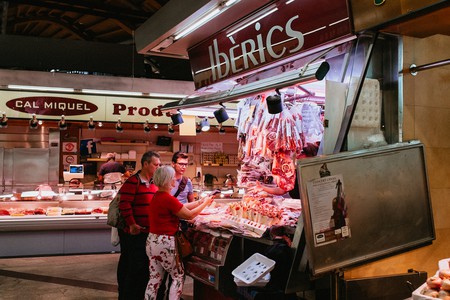 Not all ham is created equal in Spain. There are numerous styles and quality levels, but the basic names you need to know are serrano, ibérico and ibérico de bellota. Serrano is the cheapest, aged the least, and isn’t from the famous Iberian black pig. Of the Iberian ham varieties, the bellota (acorn-fed) is the best – ham aged for a minimum of three years, made from pigs that gorge on wild acorns for the final months of their lives in the mountainous oak forests of southwestern Spain. Bodega La Puntual serves expertly hand-carved jamón ibérico de bellota, produced by the famous Maldonado brand of Extremadura.

Vila Viniteca is one of Barcelona’s premier wine sellers, and they also have an excellent gourmet shop called La Teca next door to their main storefront. At La Teca, fans of edible souvenirs will be in foodie heaven, and any of the products – from the fine wines and gourmet conservas to any of the 300-plus cheese in their impressive cellar – can be enjoyed on-site at their petite tasting bar.

Experience the cuisine of Albert Adrià

Albert Adrià is arguably the most well-known chef in Barcelona. Following in the footsteps of his brother Ferran Adrià of the fabled El Bulli restaurant, Albert now heads the elBarri restaurant group, with several Michelin stars and styles of cuisine that span from the Mediterranean to Latin America and Asia. Tickets is their most famous, flagship restaurant, but if you can’t manage a reservation (don’t feel bad, most people can’t get one without booking several months in advance), check out Bodega 1900 across the street. A more classic, casual and affordable meal than Tickets, but still with that familiar Adrià flair.

Specialty coffee has found a welcoming home in Barcelona. Over the last several years, the number of businesses selling high-end ‘third-wave’ coffee has exploded, but one of the first, and still one of the most popular, is Nomad. The café is usually crowded and is not meant to be a place where you spend an hour lingering over your coffee with your laptop. It’s a coffee bar designed like a showroom where espresso shots are pulled with style, and their many varieties of house-roasted beans are also for sale in bulk.

Stock up on traditional candies, chocolates and pastries at La Colmena 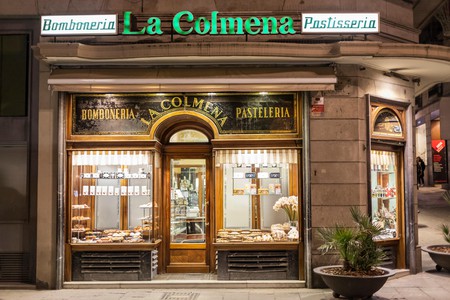 La Colmena is one of the most classic and longest-standing sweets shops in the city. Their location couldn’t be more prime – their storefront is just steps from the entrance of the Jaume 1 metro station, which is one of the most central stops in Barcelona. La Colmena specialises in seasonal treats, like the almond and pine nut panellets for All Saints’ Day and the Coca de Sant Joan for Midsummer Night’s Eve (or Eve of Saint Joan), but they are also famous for their handmade caramelos – artisanal caramel candies in myriad flavours that are still made and wrapped by hand.

Put down a pint of local craft beer at BierCaB

It’s often surprising to visitors to learn that Spain consumes more than twice as much beer as wine per capita each year. Granted, the vast majority of the beer that Spaniards drink is of the commercial lager variety, produced by brewing giants such as Estella Damm, Mahou and San Miguel. The tiny niche of craft beer is steadily growing, with over 500 breweries producing beer. Check out the huge selection of local craft beers on tap at BierCaB, as well as their menu of gourmet bar food and tapas.

Sample local wines by the glass at El Diset

If you want to sample a large variety of local Catalan wines but don’t want to go for an entire bottle, you may be out of luck at most restaurants in the city. Typical restaurants have, at best, a modest selection of wines by the glass, but not El Diset. With around 20 wines available by the glass and many more by the bottle, you can happily taste your way across Catalonia, from white to rosé to red, with a glass of Champagne-method Cava for dessert. El Diset offers a diverse variety of traditional and fusion-inspired tapas and flatbreads to pair with their pours.

Have an evening of classy cocktails in the hidden laboratory of Dr. Stavinsky

Winner of the title of Best Bar in Spain in the 2018 Coaster Awards, Dr. Stavinksy is no longer a secret, though it’s still unlikely you’ll just wander by this eccentric bar by accident. Found on the narrow street Carrer dels Mirallers, in a network of ancient medieval alleys in the heart of Barcelona’s El Born neighborhood, Dr. Stavinsky serves world-class creative cocktails in a space that feels more like a mad scientist’s laboratory mixed with a 1940s apothecary than a cocktail bar at the top of international mixology trends. 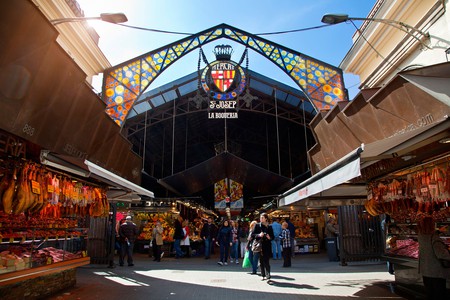 Everyone will tell you to eat at El Quim when you visit the Boqueria, and with good reason. This is arguably the best and most creative restaurant in the market. With charismatic owner Quim at the helm, the restaurant has continued to evolve and expand with its growing popularity. You now often find tourists waiting to grab one of the limited stools at the kitchen counter before the shutters have even been raised, so your best bet is to head there early on a Tuesday, Thursday, Friday or Saturday, when the restaurant opens at 8am. El Quim’s most famous dishes are their fried eggs, served with everything from baby squid to foie gras.

Feast on mountains of fresh seafood at La Paradeta 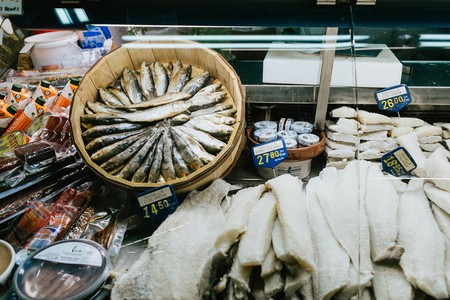 Small fish like sardines and anchovies are particularly favoured in Catalonia, especially when served in tins | © V Opoku / Culture Trip

Sometimes you just want heaps of seafood, prepared without fuss, that doesn’t cost you your entire week’s budget for a single meal. In Barcelona’s high-end restaurant scene, fresh seafood can often be incredibly expensive, but at La Paradeta, which has seven locations around Barcelona, things are much simpler. Just walk up to the counter, heaped with chipped ice and loaded with fresh seafood, and order the items you want, by weight – squid, prawns, lobster, crab, clams, monkfish, octopus and much more. Wine is cheap, and side dishes are limited to bread, soup and salad. Pay for your order, take your ticket, and wait for your number to be called.

El Xampanyet (“The Little Champagne”) is one of the oldest bars still in operation in Barcelona. Opened in 1920, this lively locale is usually packed, with the handful of tables immediately snagged by the first lucky customers to arrive just as the metal shutters are raised. Try their house sparkling wine, similar to prosecco, or go for a glass of real Cava if you prefer a drier flavour. To pair with the rivers of bubbly served here day and night, you’ll find a wide selection of conservas (canned, bottled and preserved seafood and vegetables, like canned mussels, oil-poached tuna and white asparagus), as well as a delicious menu of Catalan favorites like grilled wild mushrooms, sausage with chickpeas, and white beans with baby squid.

If you happen to be in Barcelona between February and April, don’t miss the chance to try the legendary winter onions known as calçots at a typical onion cookout – or calçotada. Calçots are similar to leeks, but more slender, and are typically roasted on a grill until they are charred black before being wrapped in newspaper, packed in air-tight trays and steamed with their own heat until soft and succulent. To eat a calçot, you pull the charred exterior off with a smooth downward tug while holding the top leaves, dip the tender core into a crock of romesco sauce, then lower the entire onion into your mouth.

The best calçotadas are usually held at traditional Catalan country homes, called masias, but without some pre-planning or the invitation of a friend, this isn’t always possible for visitors to the city. However, the next best thing is to head up into the hills above Barcelona to places like Can Martí for a real onion feast, restaurant-style. Calçotadas typically begin with wine, bread and calçots, before moving on to grilled meats and sausages, with the classic crema catalana for dessert. You typically pay a fixed price, which includes all the courses, water and a half bottle of wine per person.

Throughout the year, Barcelona is home to many food festivals, most of which combine artisan food producers with a wide array of local food trucks, DJs and live bands, craft beer and wine, local fashion designers and various activities – from cooking workshops to family-friendly arts and crafts seasons. These festivals always have a lively and colourful ambiance that captures the sunny disposition and creative nature of Barcelona perfectly. Check out Palo Alto Market, which is the first weekend of every month, and Van Van Market, All Those Market, and Eat Street to see upcoming dates.