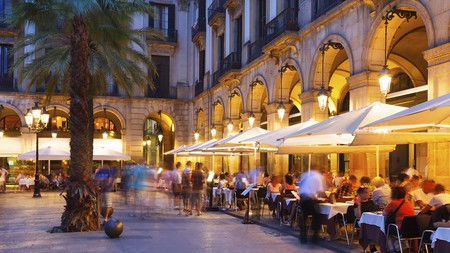 Catalonia has its own rich history and distinctive culture, including its own special cuisine. Heavily influenced by neighbouring France and Italy, Catalan cuisine is truly Mediterranean, stemming from both the land and sea.

Catalonia, centred along the eastern coast of Spain, has a cuisine all its own. The dishes are greatly influenced by ingredients found on the Mediterranean coast: vegetables (aubergines, tomatoes, artichokes), legumes (chickpeas and beans), wheat (pasta and bread), olive oil, wine, pork (sausage and ham) and fish (cod, tuna, sardines and anchovies, among others). And the region has certainly lent itself to some award-wining restaurants, and kitchens rewarded with plenty of Michelin stars.

Many of the traditional Catalan dishes focus on showcasing these ingredients, transforming them into stews, salads, soups and fish- and pork-forward plates – not simply the requisite tapas found throughout Spain. A trip to Catalonia will have you delighting in charred calçots (spring onions endemic to the region), salads studded with salt cod and tons of house-made sausage flanked by mounds of beans. Here the Catalan dishes you have to try.

Escalivada – which stems from the Catalan verb escalivar, meaning ‘to cook in ashes’ – is crafted out of blackened tomatoes, peppers and aubergines. The vegetables are grilled over an open fire or directly in the ashes, transforming the colourful nightshades (which grow well in Catalonia, thanks to the ample sunlight) into charred strips, ready to be peeled. Little more is required for the dish’s preparation, aside from dressing the smoky vegetables with a drizzle of olive oil and a pinch of salt. You’ll sometimes find it served alongside anchovies and tuna. 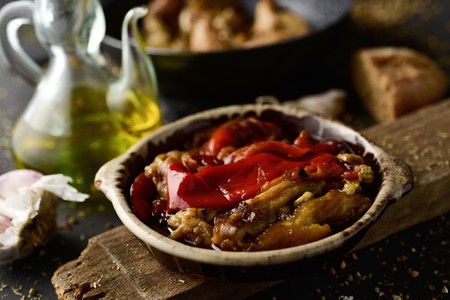 Escalivada is made with grilled and peeled aubergines, red peppers and tomatoes | © iStock / Getty Images Plus

Escudella, as it is often shortened to, is a two-part dish. The escudella is a soup stewed with meat and vegetables, bobbing with scraps of pasta or rice. The second half is the carn d’olla: all of the meat (bones, sausages and a large meatball known as pilota) and vegetables (carrots, celery and cabbage) are cooked in the soup first, removed and then served on the side. 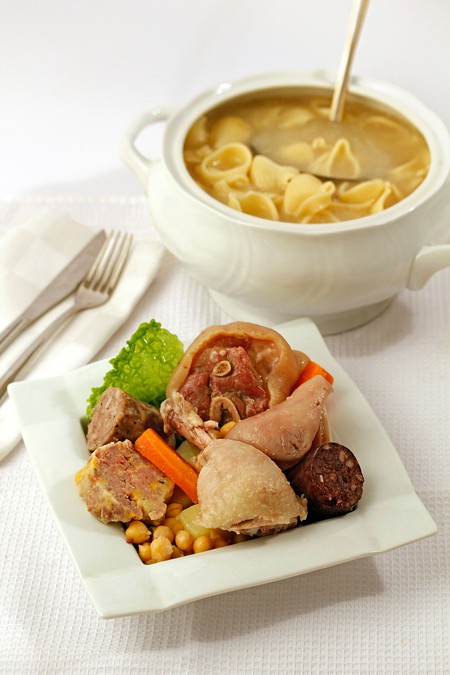 Catalonia has Italy to thank for canelons, most likely due to the centuries of trade between the two nations. This Italian-influenced pasta dish – not too dissimilar to lasagne – is made out of tubes of pasta stuffed with meat and layered with creamy béchamel sauce. The dish is often eaten around Christmas, with cooks taking the leftover meat from the night before and repurposing it in pasta.

Literally meaning ‘head and leg’, cap i pota is a traditional Catalan dish that has become less popular in modern times. These days, it’s often found on the menus of old-school restaurants, although it can also be spotted in some of Barcelona’s more trendy street food markets. It’s made from a base of offal or tripe, simmered until soft; occasionally ham hocks and veal head are added to the stew.

Salt cod, called bacallà in Catalan, is a method of preserving fish: fresh cod is rubbed with salt and then hung outside to dry. The dried fish can be found in a host of Catalan dishes, the most popular being esqueixada. Often feasted upon in the warm summer months, esqueixada is a salad tossed with salt cod, sliced tomatoes and onions, and drizzled with olive oil and vinegar. The salad is sometimes sprinkled with olives and hard-boiled eggs. 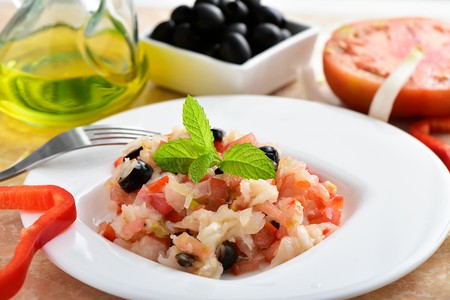 For Catalonia, calçots are perhaps the most beloved onion. They are a large, long spring allium grown during the winter in Catalonia and peaking between January and March. Once they’re picked, restaurants overflow with them: you’ll find them prepared in the traditional calçotada way, where the onions are cooked in the ashes of an open fire, wrapped in paper and served alongside a bowl of romesco sauce (red peppers blitzed with nuts).

Because of its location on the shores of the Mediterranean, Catalonia enjoys an apparently never-ending supply of fresh fish and seafood. Take suquet de peix, a Catalan fish stew that highlights the region’s devotion to all things pescatarian. The dish was invented by fishing folk who would build an easy meal for themselves at the end of a long shift using the parts of the catch that weren’t sold that day: bits of hake, monkfish, clams and mussels. The stew is also mixed with saffron – an expensive spice grown in Central Spain – giving it its recognisable red colour. 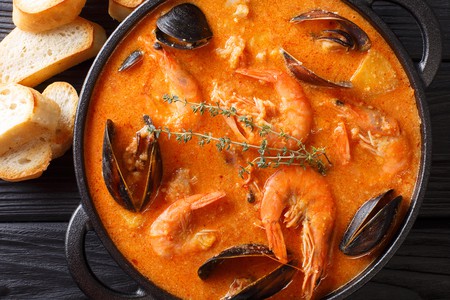 Cooked in Catalonia since the 16th century, mongetes amb botifarra is the Catalan version of sausage and beans. Botifarra is the sausage, which is typically made of pork (although sometimes goose meat) and laced with a host of fresh spices. Other versions of this sausage include black botifarra made of pig’s blood, and botifarra d’arròs built out of rice, and occasionally some fattier parts of the animal. The sausage is flanked by a side of white beans and garnished with parsley.

Pa amb tomàquet is an essential part of any Catalan meal. It’s a simple snack: hunks of bread are crisped up and rubbed with tomatoes, drizzled with olive oil and finished off with a sprinkling of salt. Specific tomatoes are employed for this dish, known as tomate de penjar, which means ‘tomato to be hung’, in reference to the way tomatoes are bunched along a vine and could be hung up in a kitchen.

Fricandó is one of the few traditional Catalan dishes that stars beef: sliced beef is covered in flour, seared in butter or olive oil with some mushrooms and stewed in white wine. It’s often made the night before and served the next day. 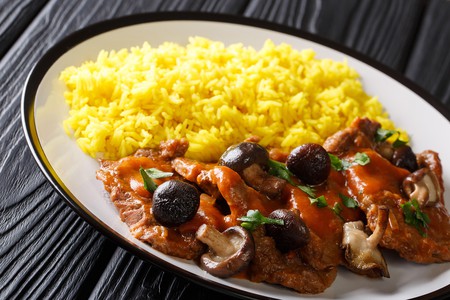 Perhaps one of the most famous desserts in Catalonia, crema catalana is quite similar to the French crème brûlée, aside from a few key ingredients. Unlike the French version, crema catalana uses a base of milk (instead of cream) and is thickened with eggs. It’s cooked in the oven in a water bath; once out, the tops are doused with sugar and torched. 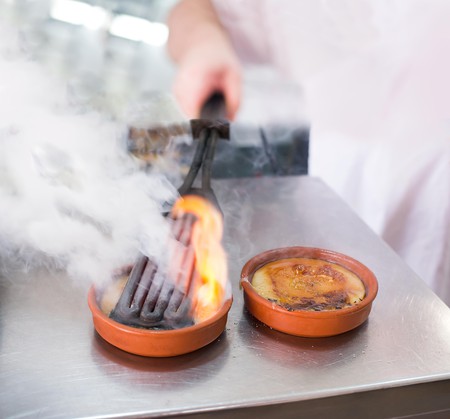