15 Delicious Dishes Worth a Trip to Barcelona For 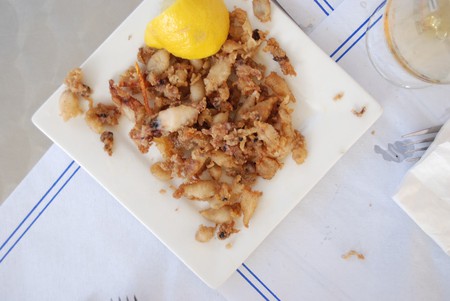 It’s no secret that the food culture in Barcelona is out of this world, from traditional tapas bars and mind-blowing food markets to world-famous restaurants and pioneering chefs. Whether you’re a fan of hearty homemade fare or have a taste for haute cuisine, these 15 dishes will make you want to be in Barcelona right now.

This tantalising tapa was invented in Barcelona in a small neighbourhood restaurant in La Barceloneta. The dish, which means ‘bomb’, is said to have been inspired by the bombs that were used by the Anarchists during the Spanish Civil War. It’s a tennis ball-sized ball of mashed potato and meat, breaded and deep-fried before being topped with aioli and spicy tomato sauce.

A classic Spanish dish, patatas bravas are deep-fried chunks of potato topped with aioli sauce and a fiery tomato sauce that is the reason these potatoes are considered to be suitable only for the brave. Although you can find these in tapas bars all across Spain, the bar Tomás in the Sarrià neighbourhood is reported to have some of the best in the city, if not the country. 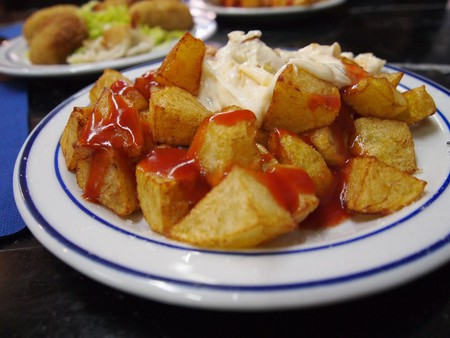 A typically Catalan salad, esqueixada is made using bacallà or salt cod, shredded on a bed of ripe tomatoes, onions and fragrant olive oil. It’s also common to see other ingredients, such as hard-boiled egg, olives or pepper in the esqueixada, although the most important ingredient is without doubt the salt cod, which can be bought in food markets either dried or pre-soaked and ready for cooking.

A seasonal treat, panellets are small ball-shaped biscuits served around the time of All Saints Day on November 1. The panellets are made using different kinds of nuts, of which pine nuts are the most traditional, which cover small round balls of marzipan. The panellets, or ‘little breads’, are typically eaten alongside a glass of sweet wine known as moscatell and are typical in the Balearic Islands, Andorra and Valencia, too. 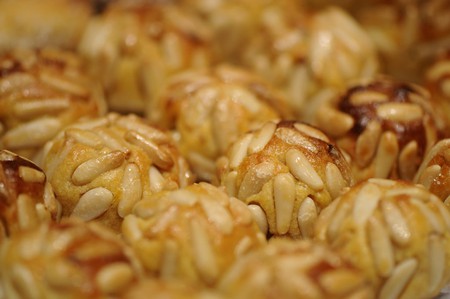 The quintessential Catalan dish – and also the most simple – pa amb tomaquèt is literally ‘bread with tomato’ and is a feature at almost every meal. Less of a standalone dish than an accompaniment, the ‘bread with tomato’ is made with a crusty bread known as pan de payés, rubbed with overripe tomato and doused in fragrant olive oil and a sprinkle of salt. Some people rub the bread with a clove of garlic before the tomato, but this is very much a matter of personal choice.

Although this flavoursome sauce is said to have originated south of Barcelona in the city of Tarragona, you’ll find it on menus everywhere in traditional Catalan restaurants in Barcelona. Made using red peppers – traditionally of the nyora variety – vinegar and nuts, the sauce has a rich texture and taste that readily accompanies vegetables, meats and fish. 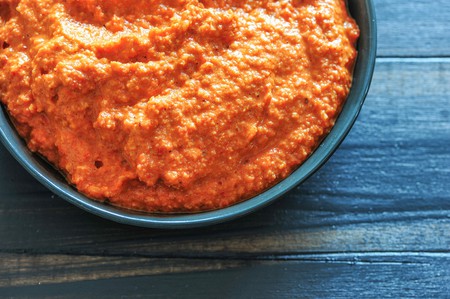 Halfway between a Spring onion and a leek, these unusual alliums drive Catalans crazy come calçot season, which typically starts just after Christmas. They even have their own feast, known as a calçotada, which involves a boozy barbecue during which calçots are chargrilled on an open fire. Guests then grab a calçot whole, pull off the black exterior and drip the sweet, tender stem in a nutty romesco sauce.

One of the most influential chefs of the 20th century, Ferran Adrià, ran the world-famous elBulli restaurant, which was five times voted the best restaurant in the world. Here, he pioneered revolutionary techniques using unusual ingredients to deconstruct and reinvent dishes to give them a new appearance and offer guests a new kind of experience. One of the most iconic of his dishes is none other than an olive – but a spherified olive, meaning that, despite the appearance of a regular olive, this is in fact an olive that has been reconstructed from olive essence. The result is a burst of surprise and delight which can still be enjoyed in the popular Tickets tapas restaurant or Bodega 1900, run by Adrià’s brother, Albert Adrià. 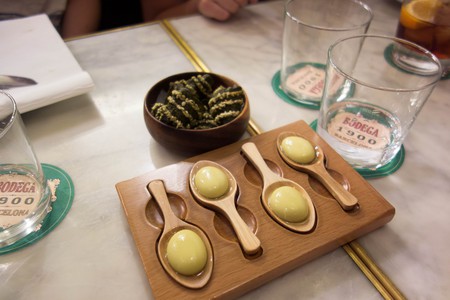 This flavoursome vegetarian dish gets its name from the Catalan word for ‘to cook in ashes’, escalivar. Traditionally, a mixture of ripe Mediterranean vegetables, including peppers, onions and aubergine, would be cooked whole in the embers of a wood fire. When the vegetables were charred on the outside, the tender flesh would be pulled out and used either as an accompaniment to meat or served on a slice of bread. These days, you’ll find escalivada on the menu of many a tapas bar in Barcelona and it sometimes comes with black anchovies or olives.

While paella may be one of the most popular Spanish dishes of all time, here in Barcelona, locals go mad for a variant made with noodles instead of rice. The fideuà is cooked in the same iconic dish and garnished in the same way as a paella, but the texture is slightly softer. The best paella restaurants in Barcelona, many of which are located in the fisherman’s neighbourhood La Barceloneta, serve both rice paella and fideuà. 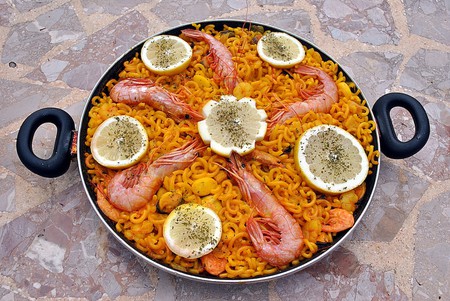 This seafood dish is best enjoyed when broad beans are in season – something that happens twice a year in Catalonia. Small squids are cooked in a little olive oil, letting whatever ink they contain form the basis for a sauce. The fresh broad beans are then added and cooked in the squid’s juices, adding a touch of freshness and a slight sweetness to the dish. This is the kind of dish you’ll find just as easily at a family-run tapas bar as in a high-end restaurant serving modern Catalan cuisine.

Not too dissimilar to an Italian foccacia, the coca is a type of flat bread which comes in many different types, both sweet and savoury. The most common coca is a savoury kind which is topped with ingredients such as Mediterranean vegetables and anchovies, or local sausage known as botifarra. There are also certain coca breads for particular times of the year, such as the Coca de Sant Joan, which is eaten around the time of Midsummer and the feast of St John the Baptist. This is a sweet coca bread topped with sugar crystals and candied fruits which is accompanied by a glass of local sparkling wine or Cava. 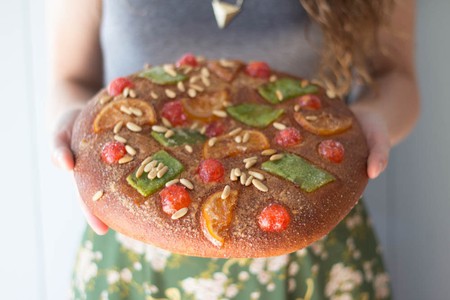 Given its location on the shores of the Mediterranean, it’s no surprise that Barcelona’s cuisine is heavily influenced by the sea. One of the most popular seafood dishes is a fish soup known as suquet de peix which is generally made using small rock-feeding fish as well as morsels of monkfish and other large white fish. The soup is made from a base of onion and tomato to which saffron and white wine are added, with an almond sauce known as picada for flavour and texture. This was once the meal of fishermen who used whatever smaller, less desirable pieces of fish they hadn’t sold at market.

This classic dessert, known as ‘Catalan cream’, is a close relative of the French crème brûlée but generally features orange zest, which gives it a fruitier taste. A thick custard is left to set in a small ramequin before being sprinkled with sugar and then caramelised to form a sugar crust on the top. This is another dish you can find on the menu of nearly every traditional Catalan restaurant, as well as at more contemporary restaurants which offer lighter versions with variations such as a Crema Catalana mousse. 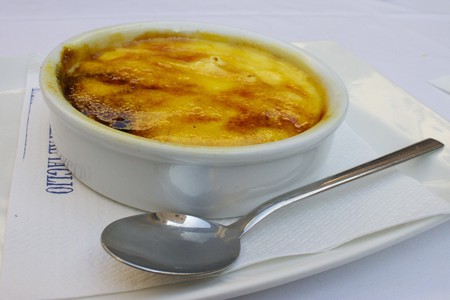 Another typically Catalan dessert, mel i mató is named after its two ingredients: honey and mató cheese. This fresh cheese is made from either cow’s or goat’s milk and has featured in Catalan cuisine since as early as the 14th century, when it was mentioned in Sent Soví, the earliest known Catalan cookbook. The cheese is simply served alongside a generous helping of honey, which adds sweetness to the subtle flavour of the unsalted cheese.

What are the top six culinary experiences you can have in Barcelona?