The Best Things To Do in Mitte, Berlin 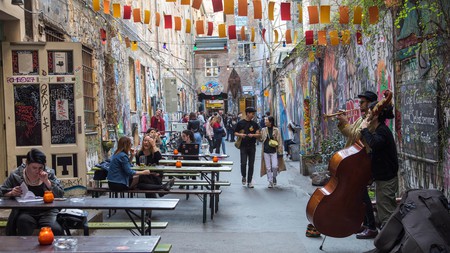 Berlin’s central district, Mitte, is home to some of the German capital’s most fascinating museums and historical architecture. Packed with sights such as the Reichstag and Museum Island, there’s no shortage of things to do in Mitte.

As well as being the geographical centre of Berlin, Mitte is also where the city was born in the 13th century. As the neighbourhood at the heart of Berlin’s historical development, Mitte reflects the city’s spirit through its vibrant mix of historical sights, cultural venues, architecture and restaurants: from the iconic TV tower and some of Berlin’s best museums, to eclectic street art and Central Asian cuisine at the Tajikistan tearoom.

Spend a day (or three) at Museum Island

The Altes Museum (Old Museum) opened in 1830 as the first on the inner-city island, and is home to the largest collection of Etruscan art outside of Italy. There’s also a permanent exhibition showcasing art from ancient Greece to the Roman Empire – look out for the portrait busts of Caesar and Cleopatra. And if you’re fascinated by the lives of Ancient Egyptians, head across to the Neues Museum to see the famous bust of ancient Egyptian queen Nefertiti.

The Alte Nationalgalerie (Old National Gallery) looks like an ancient temple, built in a style that combines influences from late Classicism and the early Neo-Renaissance. Here, you can marvel at three floors of art from 19th-century Europe, including famous Impressionist paintings by Monet, Renoir and Manet on the second floor. For more art, the Bode-Museum showcases an extensive collection of sculptures from the medieval period to the late 18th century, in addition to treasures from the Museum of Byzantine Art and the Numismatic Collection.

Although the Pergamonmuseum will be undergoing major refurbishment until 2025, visitors can still check out the fascinating collection in its constituent Museum of Islamic Art – home to Babylon’s magnificent Ishtar Gate and Processional Way.

There’s a lot to see, so save some cash by purchasing a Berlin WelcomeCard online or at any train ticket machine to gain access to all five museums over three consecutive days. What’s more, this also serves as your ticket on Berlin public transport. 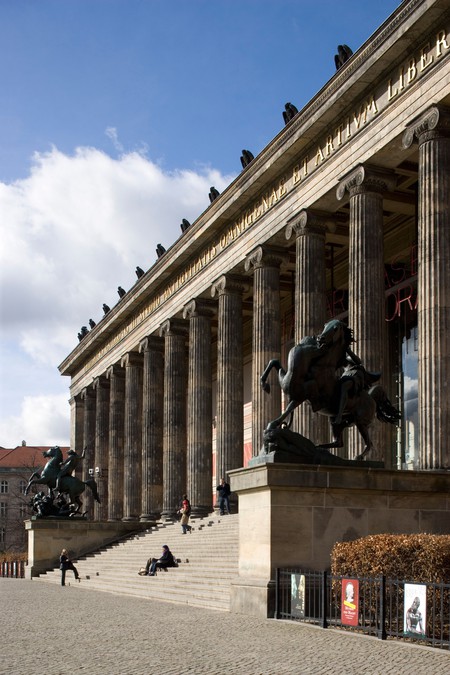 Take a tour of the Reichstag

The Reichstag is Germany’s main Parliament building, and was at the forefront of the country’s turbulent history. Today, the public can visit the 19th-century building and its distinctive glass dome (designed by architect Norman Foster following the reunification of Germany). Audio guides are available in 11 languages, providing visitors information on the building itself, its surroundings, and the work of Parliament. Admission is free, but advance registration is required. 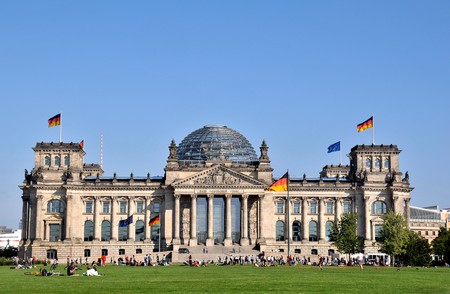 Get your chocolate fix at Rausch Schokoladenhaus

Attention all chocolate lovers – Rausch Schokoladenhaus in Gendarmenmarkt Square is calling your name. This traditional chocolatier – run by the same family for five generations – offers a mouth-watering selection of handmade truffles, pralines and desserts. The sweet treats are freshly prepared each day at the Rausch chocolate factory in Berlin-Tempelhof, where the expert chocolatiers put careful thought and artistic innovation into each culinary creation. The Mitte-based shop is even home to intricate chocolate sculptures that depict Berlin’s iconic landmarks, including the Brandenburg Gate, the Reichstag, the Kaiser Wilhelm Memorial Church and the Berlin TV Tower. 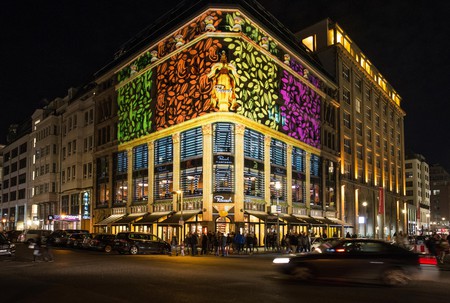 After visiting Rausch Schokoladenhaus, head over to Augustiner am Gendarmenmarkt to sample some traditional German beer. The rustic Bavarian beer hall serves up full-bodied Augustiner brewed in Munich’s oldest independent brewery. There’s also a selection of hearty German cuisine, such as roast knuckle of pork and apple strudel. 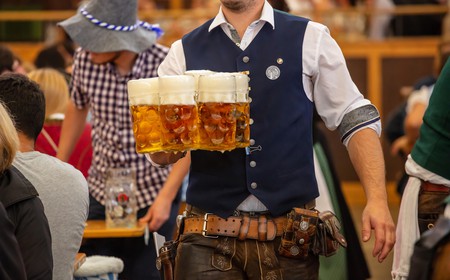 Admire the view from the Berliner Fernsehturm

The famous Berliner Fernsehturm (TV tower) at Alexanderplatz can be seen from almost every point in the city, making it an emblem of Berlin. With a total height of 368 metres (1, 197 feet), the impressive landmark is the tallest building in Germany and one of the most popular spots for experiencing 360-degree views of the entire city – and on a clear day even as far as Brandenburg, 42 kilometres (27 miles) away. No need to battle through crowds to experience the best views – visit the tower’s rotating restaurant to enjoy the panorama in the company of a glass of fine wine. 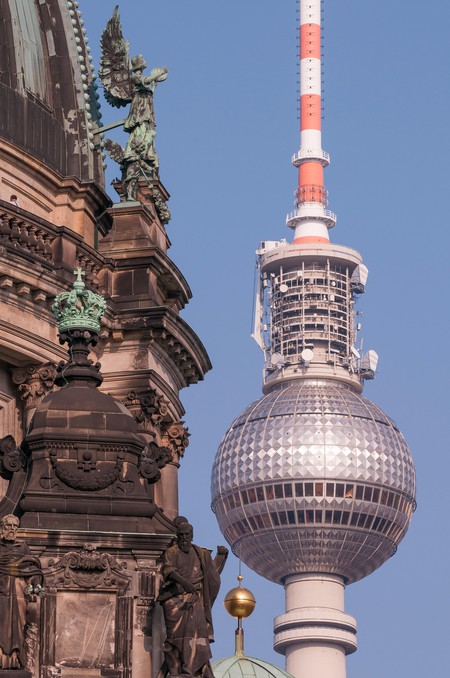 A must-visit for anyone in need of some retail therapy, the lively Hackescher Höfe (adjacent to the Hackescher Markt) is located only a short walk away from Alexanderplatz. This maze of eight Art Nouveau courtyards is home to fashion stores (both big brands and independent Berlin designers such as Moni Novy), cafés and restaurants. Every Saturday from 10am-6pm, the Hackesche Höfe courtyards host a farmers’ market, where you’ll find fresh fruit and veg, home-baked bread, flowers, cheese and other local produce. Don’t forget to try the delicious honey-marzipan sweets, decorated with pistachios or pineapple. 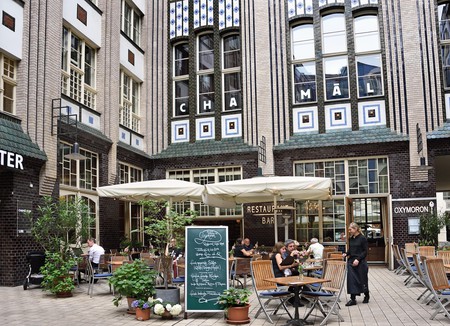 For a taste of the area’s creativity, enter Hackescher Höfe via the alley to the right of Café Cinema to be greeted with a courtyard awash with street art, courtesy of non-profit arts organisation Haus Schwarzenberg. New art pieces are painted almost weekly, but famous street artists such as El Bocho, Miss Van, Stinkfish and Otto Schade have all added their visual stamp to the courtyard and alleyway walls. 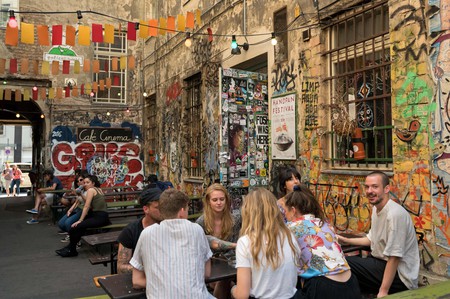 Sample a taste of central Asia at the Tajikistan Tearoom

Situated in a quiet courtyard lined with galleries and cafés, the Tajikistan Tearoom is somewhat hidden from the crowds that flock to Mitte in search of historical sites. A gift to the GDR (East Germany) from the Soviet Republic of Tajikistan, the tearoom serves a mix of Central Asian and Russian cuisine such as plov (pilaf) and pelmeni dumplings. The plush interior features ornately carved wooden pillars, Persian carpets and comfortable floor cushions where guests can kick their shoes off and relax after a day of shopping and sightseeing. 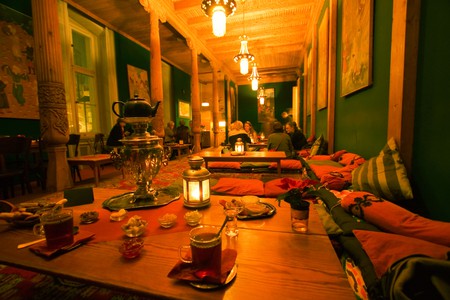 Mitte is home to a number of World War II sites that are well worth visiting if you want to learn more about this tumultuous period of the city’s past. One of the most popular is the Topography of Terror museum – set at the former headquarters of the Gestapo and SS. The permanent exhibition showcases photographs and documents that illustrate state terror during the Nazi era.

Walk 10 minutes north along Wilhelmstraße and you’ll find the infamous site of the Führerbunker – the location of Hitler’s multi-storey air raid shelter, and the place where he died. After the war, the Soviets attempted to destroy the bunker, but some rooms are rumoured to have remained intact. The structure sat under its own rubble, unused until after the fall of the Berlin Wall. Today a simple plaque marks the spot at the intersection of In den Ministergärten and Gertrud-Kolmar-Straße.

Continue north to the Memorial for the Murdered Jews of Europe (also known as the Holocaust Memorial). The vast outdoor memorial is dedicated to the millions of Jews killed under the Nazi regime. It comprises a maze of over 2,700 concrete blocks in varying heights, arranged in a grid pattern. The experience of walking through them is supposed to evoke a claustrophobic, unsettling feeling. 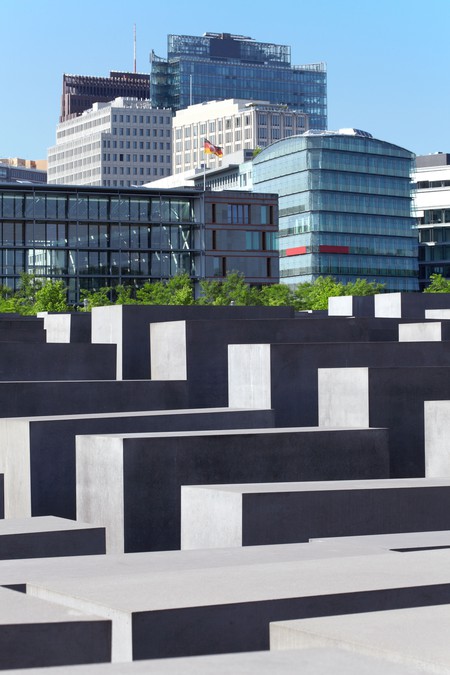 The Holocaust memorial is made up of over 2,700 concrete blocks | © A. Astes / Alamy Stock Photo

This article is an updated version of a story created by Rachel Dickenson.