15 Delicious Dishes Worth a Trip to Berlin For 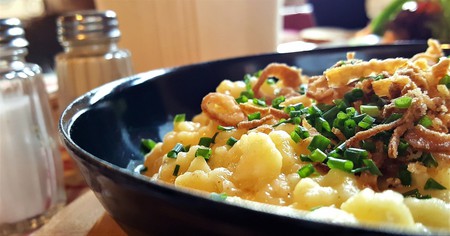 Berlin’s culinary landscape is constantly evolving to reflect the city’s multicultural and creative nature. With new restaurants, food markets and experiences popping up each month, the German capital always has something to offer. But Berlin has a few dishes that never go out of style. Here are 15 delicious dishes that are worth a trip to the city.

Currywurst is a Berlin tradition so beloved in the city that roughly 70 million are consumed every year. Consisting of steamed and then fried pork sausages, typically cut into slices and served with curry ketchup and fries, this truly German treat can be found at stalls and shops all over the city. 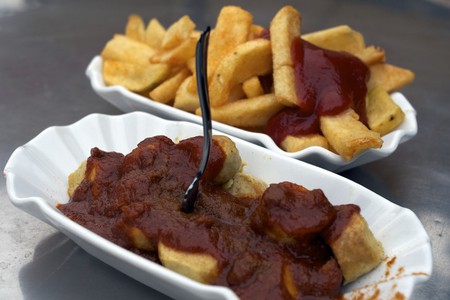 Döner kebabs are Berlin’s top fast food and a reflection of the city’s rich Turkish culture. The meaty, salad, garlic sauce in bread combo is the perfect late-night snack and a must-try when in Berlin. 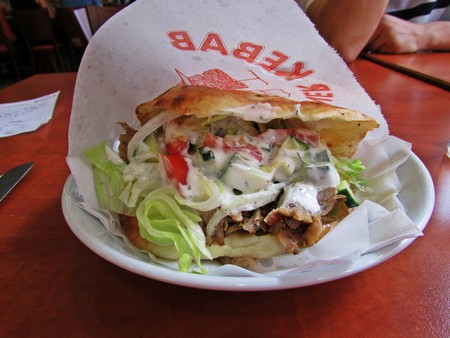 It’s no secret that Germany is fond of sausages, so naturally, the capital’s top dishes involve a lot of the country’s favourite food. Bockwurst is one of these many sausages. Traditionally made from ground veal and pork, it is flavoured with salt, white pepper, and paprika. It’s then served up with a white bread roll, with mustard and of course some beer, traditionally Bock beer, to wash it all down. 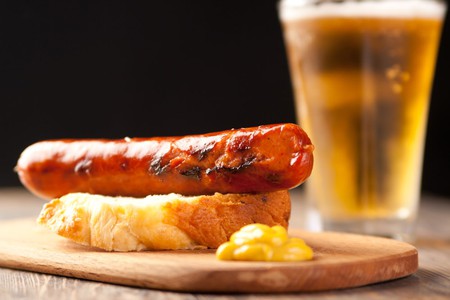 Back in the late 1970s when Berlin was still divided by the wall, the Soviets decided the former East Berlin needed their own new food-favourites. Forming a think-tank to whip up some new food items, the clever communists came up with hot dogs, covered in ketchup, in a bun. Today, you can taste the GDR-era food around the city, including a stand at Schönhauser Allee. 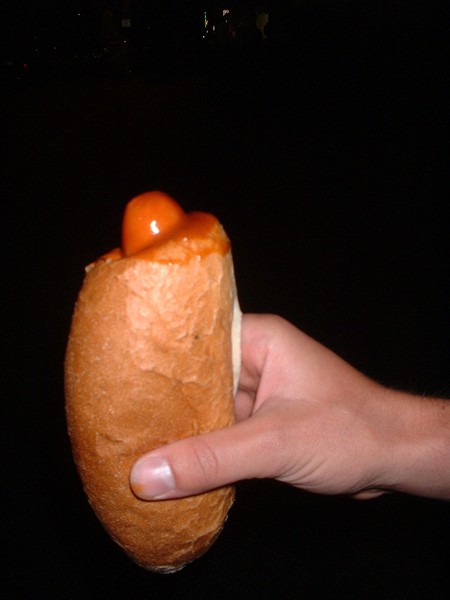 The rise of hipster burger-joints in Berlin is not an uncommon phenomenon and there are a plethora of such establishments dotted around the city. However, few compare to the infamous Burgermeister, located in trendy Kreuzberg. Hidden among the railway arches, the tiny green burger joint serves up no-fuss, deliciously-made burgers that are beloved by locals and tourists alike. 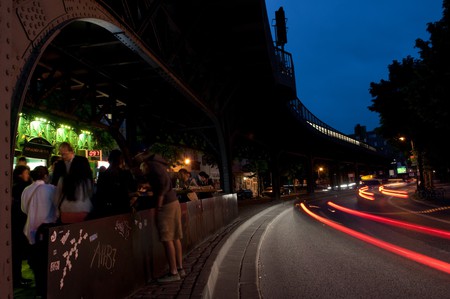 A delicious mixture of hummus, falafel, tabbouleh, grilled meat, vegetables, and rice or beans, the Turkish Teller is an array of Middle Eastern flavours. While you can find places that will serve these traditional plates all over the city, the best ones can be found in Neukölln, where the city’s largest number of Turkish citizens live. 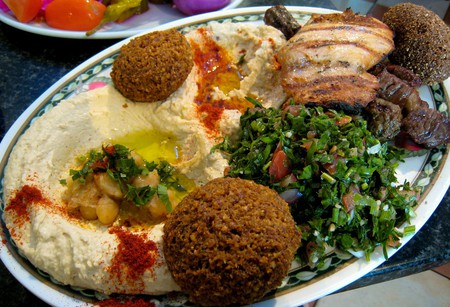 Talking about German donuts can be a little confusing. The word ‘Berliner’ means donut, particularly the jelly-filled variety, however in Berlin they’re called ‘pfannkuchen,’ which in the rest of Germany means pancake. On New Year’s Eve, Berliners (the people) have a great tradition of putting one mustard-filled donut in the pile of jellies, with the recipient supposedly getting good luck for a year. But, you don’t have to wait until the new year to try one of these delicious treats – you can find them in old-school bakeries across Berlin. 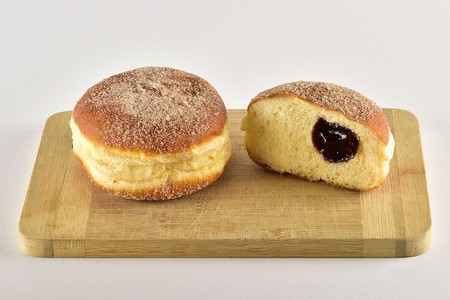 The southern German treat is basically German mac n cheese and is widely loved, particularly in the capital. The best place outside of southern Germany to try this cheesy, pasta dish in Berlin is Lebensmittel in Mitte.

Potatoes are a quintessentially German food and the country has plenty of Kartoffel (or potato) based traditional dishes. Perhaps the most delicious though is Kartoffelpuffer – the potato pancakes are fried and served with sour cream, mayonnaise or ketchup, and they’re every bit as tasty as they sound. 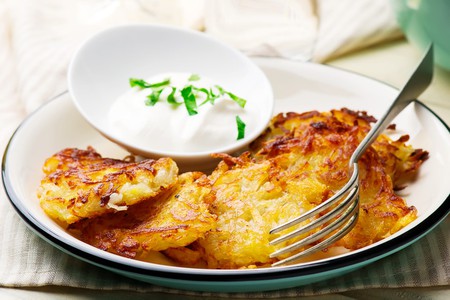 Apple strudel is another traditional treat that is seriously tasty. This apple dessert has Austrian roots and can be found around the city and is best enjoyed with a coffee at one of the city’s many cool joints. 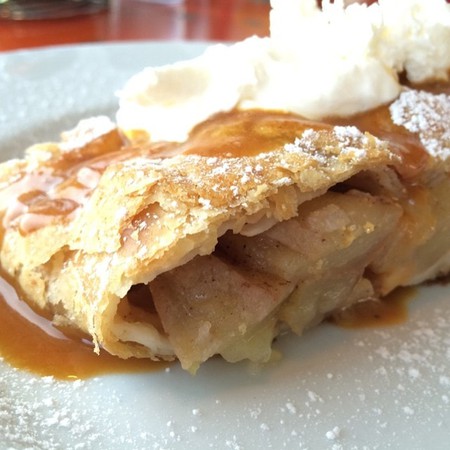 While many of Berlin’s delicious dishes are best suited to meat-eaters, the city is also very vegetarian- and vegan-friendly. Visitors can find meat-free alternatives to most of the city’s famous treats, or they can opt to explore the Turkish and African roots in the city by trying the amazing falafel. Usually served at small late-night takeaway shops, a sandwich of falafel, salad and sauce can be found predominantly in Kreuzberg and Neukölln and is the perfect late-night treat for the herbivores in the city. 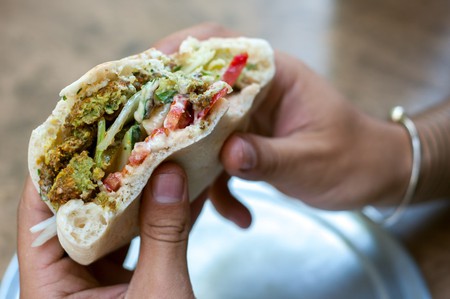 Schnitzel is a beloved classic across Germany and Austria, however, this dish takes the well-known dish and adds a twist. Schnitzel Holstein was thought up at a restaurant in Borchardt in the 18th century for German diplomat Friedrich von Holstein, and can be found in traditional joints like Weltrestaurant Markthalle. This unique dish is for the salt lovers, as it takes the traditional veal schnitzel and tops it with anchovies, a fried egg, and capers. 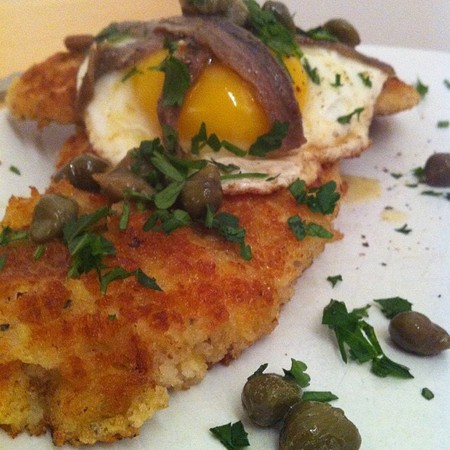 Pretzels and beer are two German treats that go perfectly together. Whether you’re enjoying them while soaking in the sun at one of the city’s beer gardens, or munching on a pretzel in a smoky Berlin bar, they’re the perfect pairing and a must-try treat when in Berlin. 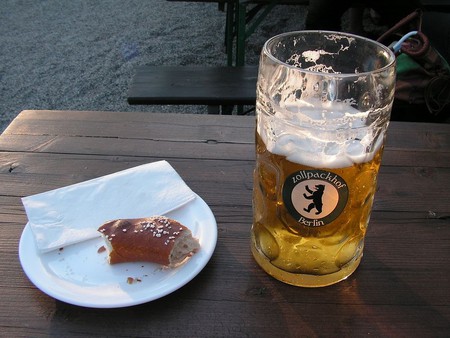 German cuisine involves a lot of pork, and nothing quite compares to the famous German pork knuckle. The mouthwatering dish, called ‘eisbein,’ or ice leg, is boiled or steamed for several hours, usually in sauerkraut, and then served up with more sauerkraut and potatoes. This melt-in-your-mouth traditional dish is one that every meat-lover will savour. 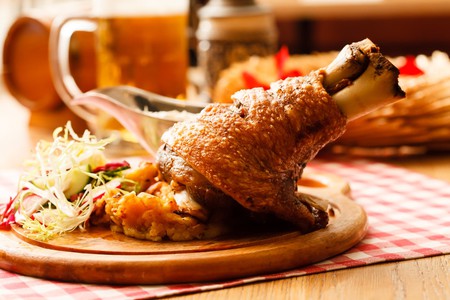 Fusion at its finest

Berlin’s culinary scene loves fusion, from its high-end restaurants to its market stalls, mingling flavours from across the globe is a trend that continues. Few places do this better then W-Der Imbiss; the Indo-Mexi-Cal-Ital joint offers a mixture of international flavours that not only reflect a trend in Berlin, but also the multicultural makeup of the city. 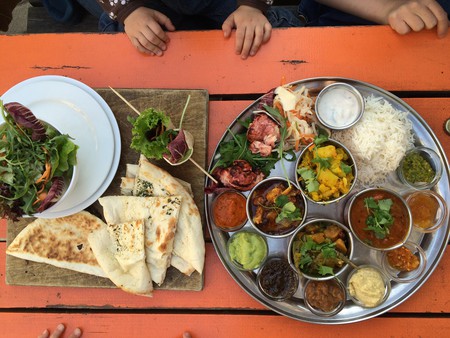